Editor’s note: The Schuylkill Center produced a wall calendar for 2017 in celebration of the environmental art program. Throughout the year, we’ll run a monthly post on our blog highlighting the art works featured in that month of the calendar. Calendars are still available, now 50% off – only $10 each!

What started out as an amateur attempt to forage for mushrooms led to 20 years of exploration, mycology enthusiasm, and art for Philadelphia artist Melissa Maddonni Haims and her husband, Josh Haims.

Josh’s curiosity was initially peaked after noticing mushroom foragers during his early morning bike rides along the Wissahickon when visiting Melissa’s parents in Norristown, while Melissa’s curiosity was sparked after inquiring about a morel mushroom dish at a Manhattan restaurant. Their curiosity grew, and Josh presented the idea of foraging to Melissa. Soon, the two were in Fairmount Park stumbling over rocks and deep into the woods in search of fungi.

Josh began stopping on his bike rides to photograph the mushrooms, and developed quite a collection of fungi photos over time. Blending her creative crocheting with an interest in biomimicry, Melissa was inspired to crochet made-to-scale mushrooms mimicking Josh’s photographs, which were then attached to found wood. Melissa had previously exhibited at the Schuylkill Center in 2012. Her work, Cold Comfort, involved crocheted yarn-bombed trees along the Widener Trail and main driveway, enlivening the brown and grey winter landscape.  At a visit to the Schuylkill Center in 2015 to discuss a possible biomimicry show, discussions with Director of Environmental Art, Christina Catanese wandered to the morel mushroom and her husband’s collection of mushroom photography, and the concept for The Foragers was born.

Melissa and Josh brought fungi life into the Schuylkill Center in the form of crocheted mushrooms and photographs in their joint exhibition in early 2016. Melissa’s crocheted tableaus were given a setting by Josh’s photographs, creating an overall feel of being immersed in a forest.

The artists chose to focus on local fungi for the show. “These are mushrooms that you could go outside here [at the Schuylkill Center] and anywhere in this area. Something that is amazing about mushrooms is just the sheer diversity of them,” Catanese said in a conversation. “I think what’s great about Melissa’s work is that it’s like these little windows into the forest floor that celebrate this diversity.” In addition to their work being displayed in the gallery, Melissa tapped back into yarn bombing and expanded her work onto trees along trails at the Schuylkill Center. Visitors could discover 9 crocheted mushrooms on their travels, staged as they might be found along the trail and on trees. In addition to the show, Melissa held a mushroom crocheting workshop, inviting participants to explore the creative and earthly processes.

A show shedding light and celebrating the forest ecosystem, Melissa explained that, like mushrooms, The Foragers exhibit represented just the fruit of something with roots stretching back 20 years. 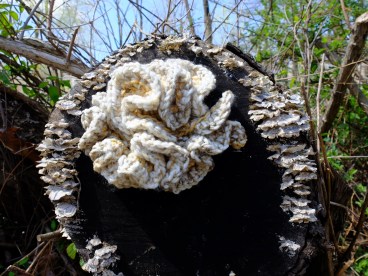 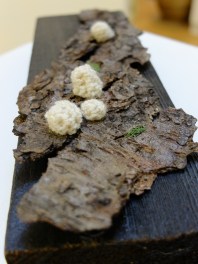 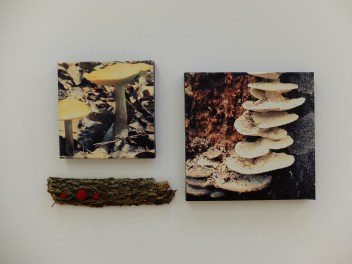 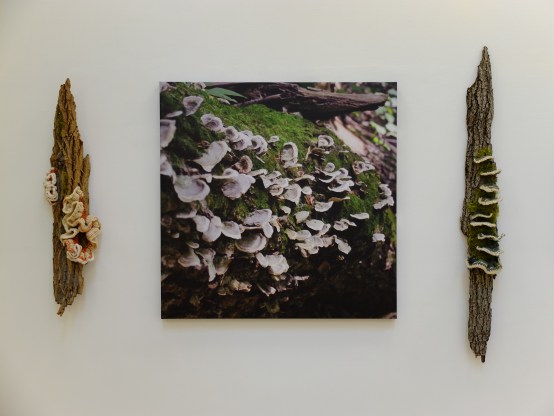 One thought on “Foraging for Art”