However, as technology progressed, many hand-crafted tools became obsolete, and the use of chemical fertilizers and pesticides were introduced. While this resulted in greater crop yields and profits, it also caused the near extinction of small family farms, as well as the loss of many indigenous plant and animal species.

Gary Miller recognized that, while the hand-made tools used by early farmers no longer had a place in modern farming practices, their existence still had value. By shifting their purpose from physical functionality to that of visual reminder of a time long-gone, they could serve a renewed purpose by inspiring communities to think about the past, and the future consequences of trying to improve upon how things are done.

In the spring of 2009, Miller constructed and installed eight large sculptures on the Schuylkill Center’s mid-nineteenth century farm site, Brolo Hill Farm, as part of an artist’s residency. A Rake’s Progress: An Agrarian Morality Tale, kept with the Center’s environmental mission, as sculptures were constructed primarily from tree limbs and branches collected from the center’s 340 acres and supplied by local arbor services. The project’s title alludes to William Hogarth’s (1697-1764) print series, “A Rake’s Progress” – referring to different types of rakes from a different country and a different time. Miller’s sculptures visually referenced and celebrated wooden farming tools commonly in use during the 1800’s. He also mainly relied on woodworking tools similar to those used by the plowrights, wainwrights, and blacksmiths from that period in Brolo Hill Farm’s history and constructed much of the eight pieces on site. Also on display at the Schuylkill Center were some of the sketches, notes, sources, and visual and literary references which he uncovered during the research that he performed prior to creating his sculptures.

As a further extension of his installation, Miller hosted a companion workshop with local students called A Meadow by the Green Woods. Students researched a particular plant or animal indigenous to Eastern Pennsylvania, then used their imagination to create strange and beautiful flowers, insects, birds, letters, numbers, and words. Their concepts were translated into art using recycled materials, and assembled to create a magical meadow.

Today, the need to feed a growing world population creates a reliance on the massive yields from modern farm production. However, by reflecting on the history of these advances and their devastating consequences, Miller worked to keep alive the renewed interest in reversing environmentally destructive practices, and an approach to farming which is productive, sustainable, reduces waste, and serves as a sustained commitment to our land. Gary Miller passed away in 2013. A beloved teacher in Philadelphia and beyond, he valued education along with his own art creation. The Schuylkill Center is grateful to have had the chance to work with Miller in 2009 and honors his memory in part through his inclusion in the calendar. 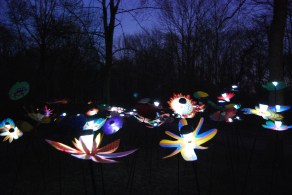 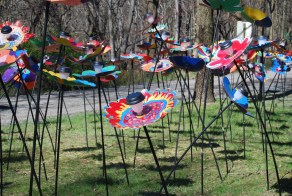 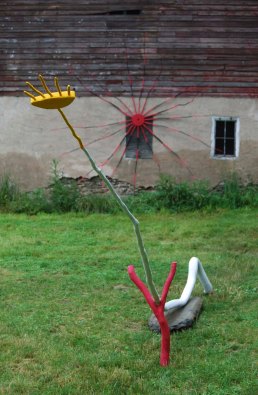 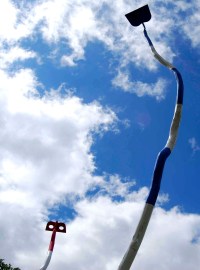 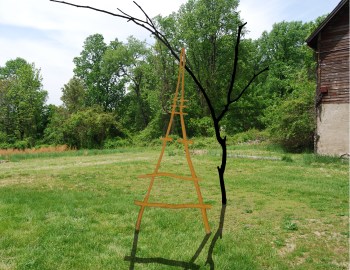 One thought on “Growing from the Past”