This winter we had a blast with the Nature in the City photo contest.  Dozens of pictures were submitted, from Philadelphia’s skyline, framed by dried coneflowers in a field, and the glory of those late-seasons now storms.  It was quite a challenge to choose the winners.  Thank you to everyone who submitted a photo. Taken in the East Oak Lane section of Philadelphia, Richele Dillard’s photograph captures the intimate level at which winter can interact with the world around us. Not even these fuzzy, spent wildflower heads could escape the clutches of winter’s icy grip, remaining frozen in time until warmer temperatures could release them. The plump drip of melted water exposes the flower once more and gives hope that new life and growth will emerge soon.  Richele notes,  I find “ice melting around spent flower heads to be both beautiful & challenging.” Emily wrote of this photo, “Sometimes, deep in South Philly, the only place to find nature is to look up.”  Even in seemingly the most constructed environments, there is always nature to be  found, and even the most commonplace sighting of birds on a power line and street trees presents an opportunity to connect with nature.  The composition of this photo is impeccable – from the symmetry of the geometric playground, powerlines, and streets; to the richness of color and the balance between the reds of the sweater, car, and awning; to the sense of having captured an everyday moment made extraordinary. Taken at the Reading Viaduct Project, this photograph remarkably captures the intersection of city and nature.  The bright white of the graffiti is beautifully complements the gold of the grass.  The organic shapes of the grass are in turn, contrasted by the sharp lines of both bricks and graffiti behind them.  We were particularly drawn to how the photograph shows nature emerging within the city. 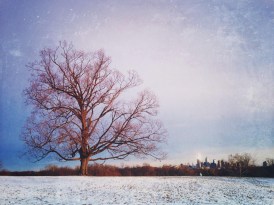 Stephanie Catt: This photo beautifully shows the city framed by nature. Here the tree, not the skyline is the dominant feature, creating a sense of a city surrounded by nature. 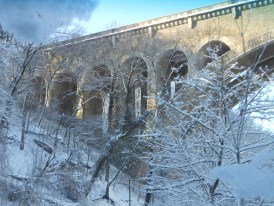 Rebecca Hoenig: Snow often obscures and softens much of the world, but winter could not cover the grandeur of this bridge. The hillside’s sharp diagonal clearly reveals the boundary where man and nature have converged. The organic twists and turns of the trees and branches are juxtaposed with the bridge’s stately architecture and clarity. This bridge is also evidence of the remarkable ways humans have molded natural objects, like stone, in order to expand into spaces beyond nature’s reach. 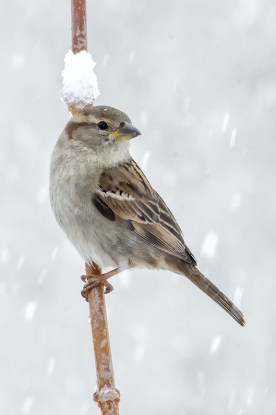 Kevin Bennett: The sense of movement in this photo captivated us all. The snow falling around the sparrow is beautifully shown, contrasting with the animacy of the sparrow. 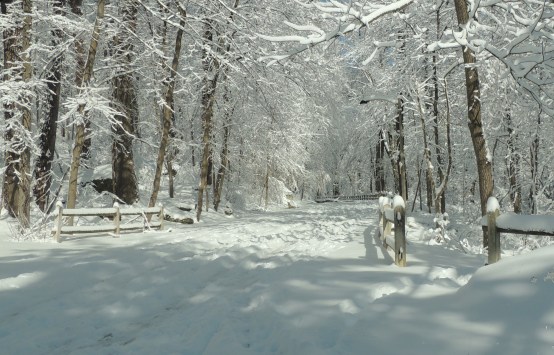 Kathy Kissane: The snow’s expanse seems to reach forever in this photograph, obscuring the world in a blanket of white. The gentle shadows are molded over the bumps and ridges of the trodden snow and the tracks are a remainder of humans’ presence. Our eye is drawn down the pathway and makes us wonder what lay beyond in the world of white.