Each spring, volunteers shepherd thousands of toads safely across Port Royal Avenue as they travel to and from their breeding grounds at the Upper Roxborough Reservoir Preserve. If you’d like to help with this year’s Toad Detour, join us for this orientation. Volunteers can help for an evening, bring a Girl or Boy Scout Troop, or become shift managers, to help manage the many volunteers who help these toads. You’ll learn all about toads, toad handling, and shift sign-ups. Volunteers are needed for evening shifts from March through June.

Contact our volunteer coordinator at volunteer@schuylkillcenter.org or call 215-853-6270 to get involved.

Just what size are these tiny toad babies that make their way, by the thousands, from the Upper Roxborough Reservoir Preserve to the Schuylkill Center each June?

This week the forests and fields are alive with sounds, all manner of animals calling out and leafy trees rustling in the breeze.  This is also the time of year when our Wildlife Rehabilitation Clinic is brimming with baby animals of all sorts. So, here are four samples of what May sounds like at the Schuylkill Center.

Toads, singing in afternoon sunlight.  A basin in this field fills with water most of the year, creating a nice habitat for toads and other amphibians.  Around the field and basin are vines, grasses, and flowering trees.

At the Wildlife Rehabilitation Clinic, baby starlings call out for their meal.  This time of year, the clinic is teeming with baby animals – sparrows, catbirds, owls, squirrels.

In the forest around our main building, songbirds call through the trees.  There are lots of birds in this recording, can you name any of them? 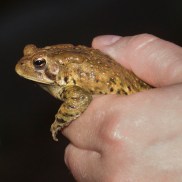 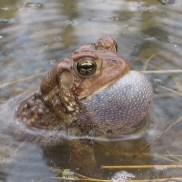 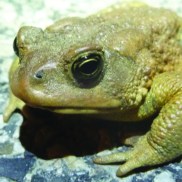 Pretty soon, we’ll be hearing a lot of what the toad says!  In early to mid- March we will start to hear the sound of the American Toad, Bufo Americanus, with its high pitched trill calling for a mate, as they do each spring.  Here in Roxborough, at the Schuylkill Center, we’ll be watching and listening during those early spring evenings.  When the evening temperature rises to 50 degrees and the ground is moist, the American Toads start to make their journey out of the woods of the Center and towards the Upper Roxborough Reservoir Preserve.

It’s almost magical to see all these toads emerging from the woods.  They don’t usually travel until after the sun sets, when there may be fewer predators, and mostly on damp and rainy nights.  But when the toads do start to move, there are usually hundreds at a time.

What is it the toads see in this old abandoned reservoir, built in the late 1800’s?  Now known as the Upper Roxborough Reservoir Preserve, the site served for many years as a holding basin for drinking water for Philadelphia.  As times changed and engineering improved, the reservoir outlived its usefulness, at least as a storage area for drinking water.  It serves another very important function: a habitat for wildlife.  The shallowness of the basin is the perfect place for toads to come to find a mate and produce offspring!  After courtship, the adult toads return to the woods.  The steep, brick-lined walls of the reservoir are not an easy path for these small, but determined toads, but their instincts tell them that they must make this journey in order to survive.

It is a difficult journey from the woods across the street, dodging cars and moving up the steep slope to the reservoir, and then down the other side of the reservoir.  All this to reach the shallow waters where they will lay their eggs for the next generation of toads.

It will be 6 weeks or so before the tiny “toadlets”, as we affectionately call these creatures the size of your thumbnail, make their way across the road to a permanent home in the woods.  In the woods, they serve a very special function in keeping mosquitoes under control for humans!

The Toad Detour project started six years ago when a citizen noted that toads were getting squashed as they crossed back and forth via Port Royal Avenue and Eva Street on their way to and from the Upper Roxborough Reservoir Preserve.  This group of dedicated citizens applied for a permit from the Department of Streets to close the roads on evenings when there was significant movement of the toads.  The Schuylkill Center has taken over this volunteer project for the past three years.  On evenings from March through June, children and adults come out with flashlights to count toads and watch this phenomenon.   We place barricades so motorists will take a short detour around the other side of the reservoir, protecting this special toad population

So, what does the toad say?  Thank you very much for saving my life!