When you think of weeds, you probably think of unwanted, unsightly plants invading and stealing vital nutrients from your lawn or garden. While this may be true for some species, further thought about weeds brings up interesting questions. What is it about a plant that categorizes it as being invasive, and could these pesky plants be of any benefit?

Artists Kaitlin Pomerantz and Zya S. Levy explored ideas such as this at the Schuylkill Center as part of their LandLab Residency, an environmental art residency program that integrates art, ecological restoration, and public engagement in conjunction with a joint project with the Center for Emerging Visual Artists (CFEVA). Pomerantz, an artist, and Levy, a botanist, work together in their botanical arts initiative WE THE WEEDS, which aims to expand knowledge of wild plants in Philadelphia. Their installation at the Schuylkill Center, titled Interwoven, is a sculpture made from invasive vines that explores the interwoven histories of humans and plants, and their mutual global migrations.

The duo began this project by investigating the flora on Schuylkill Center property. Botanical surveys in the spring and early summer resulted in a list of common plants, including natives like the Mayapple and Black Cohosh, and non-natives like Wineberry and Oriental Bittersweet.

Observation of these plants provided an interesting historical snapshot. While the re-establishment of many native species spoke of a renewed interest in being responsible stewards of the land, the presence the invasive species told of habitat fragmentation, pollution, and the material desires of humankind.

While they learned a lot during their exploration, more questions were raised. How long had the plants been there? Where did they come from? How and with whom did they travel? What ecological roles do they play on this land, and what did the flora of the property look like in other times?

Interwoven was originally woven on two large hand-built looms, using dead, invasive vines harvested from the Schuylkill Center to create the base. During the growing season, the piece is overwhelmed and covered by newly growing invasive vines, constantly changing in appearance depending on the time of year, weather, and hardiness of live, invasive vines in the surrounding area. Interwoven provided a function of removing some invasive material at the Schuylkill Center, and also served as a platform to involve visitors with hands on experiences, opening up dialogue and raising questions in the debate over invasive plants.

In conjunction with this installation, a number of coordinating programs were created, including a vine identification and harvesting workshop, facilitated weaving sessions, summer camp and afterschool programs, and even a botanical cocktail hour. Visitors at the Schuylkill Center were also welcomed to participate in the weaving of Interwoven at stations along the trails. Interwoven is still installed at the Schuylkill Center, and can currently be seen taken over by surrounding invasive vines in an open field. The piece is due to be deinstalled this year, as two years of growing seasons are taking its toll on this unique piece of art. We hope that you take some time to see Interwoven, and ponder answers to questions presented at the piece, such as what invasive plants looked like at the Schuylkill Center 100 years ago, and how they might look 100 years from now. Or, perhaps, what types of human activities do you think help to spread invasive plants and are we responsible for doing something to prevent it from happening?

It just might make you take pause and think the next time you reach down to pull out a ‘weed.’ 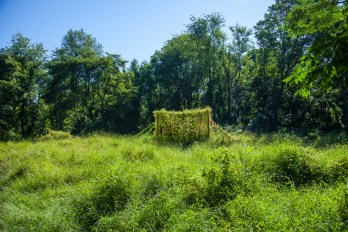 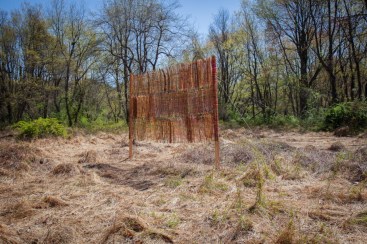