All We Want for Christmas - Schuylkill Center for Environmental Education 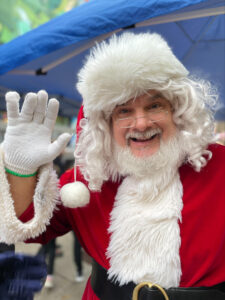 Santa visited Ridge Avenue two Saturdays ago to spread his Christmas cheer– but what will he leave under Roxborough trees this year?

With Christmas coming at week’s end, I asked a group of Roxborough leaders, community activists, nonprofit executives, and old friends what they wanted Santa to leave under their organization’s Christmas trees. As expected, they gave thoughtful, funny, and even surprising answers. Enjoy!

Michael Devigne, executive director of the Roxborough Development Corporation, told me via email, “This holiday season I would like to see Roxborough residents strolling Ridge Avenue and visiting our many shops and restaurants.” Here here. “Small businesses,” he continued, “are the backbone of our community, and there is nothing quite like seeing folks out on the Ridge spreading holiday cheer. It is great to walk down the Avenue and bump into people you know and catch up on the latest gossip. These organic community interactions make my day!”

The Manayunk Development Corporation’s Alex Cohen relayed her group’s wish. “We decided that if Santa was to leave a gift under the tree for us, it would be to have lights on the Towpath to ensure safety for the bikers and pedestrians between Shurs Lane and Ridge Avenue.”

Councilman Curtis Jones is thinking big. He’d like to see “a feasibility study for a new bridge over the Schuylkill as part of the infrastructure bill,” a project that has been discussed for decades.

Krista Wieder directs the North Light Community Center on Green Lane. “North Light would love,” she told me, “more volunteers to help with our food pantry on Mondays and Fridays, both drivers to pick up food and people to help set up! And we need an afternoon van driver for our childcare program.”

Rich Giordano is president of the Upper Roxborough Civic Association, and also co-leads the Upper Roxborough Reservoir Preserve project, the extraordinary park across from the 21st ward ballfields. The reservoir has large stone walls holding it up along both the Port Royal Avenue and Lare Street sides, and a large hole has opened on the Lare side, with a smaller one on the Port Royal side too. No surprise Rich referenced this on his Santa wish list.

Friends of Gorgas Park’s John Boyce agrees with Rich. “I’ve been serving the community for over 30 years,” he said. “We need a youth movement. Younger generations I hope will answer the call and take the reins of leadership in the near future. The other thing I hope,” he continued, “is that 2022 will be another rebound year for Gorgas Park, as people became very active in the park again in 2021. I am going to be optimistic and predict even better days ahead.”

Tom Landsmann, Rich’s Reservoir partner in crime and president of the Roxborough Manayunk Conservancy, told me, “I’d like sustainable support for groups like the RMC. We provide upkeep and capital improvements to many of our community’s green spaces. At more than half of our sites, we’re the only form of maintenance that these public spaces receive. RMC is providing a public service,” he noted “that deserves consistent sustainable funding so we can continue stewardship on behalf of our community.”

Celeste Hardester, president of the Central Roxborough Civic Association, would like to continue the greening of Roxborough. “My Christmas wish,” she wrote, “would be that property owners with large yards, especially large front yards, plant an evergreen that will grow someday to be at least 50 feet tall. The people that built homes in Roxborough 100+ years ago planted wonderful evergreens that are now reaching the end of their lives. Many are dying or being cut down, and few are being replaced. These trees have so much impact on our visual environment and of course provide the benefits of year-round shade and sustain wildlife.”

“Building on Celeste’s theme,” added Kay Sykora, an RMC trustee, “I would love to see trees along Ridge Avenue above Fountain Street,” from around the high school up. “While it’s a great walking and running area, it’s ungodly hot in the summer. Whatever everyone thinks of all of the apartments being built, for them to be successful over the long haul, the neighborhood has to be walkable. People are moving here because of our wonderful green amenities, but the acres of cement and paving that now make up that part of Roxborough is appalling.”

Pam DeLissio, our state representative, takes the conversation in a new direction. “It would be great,” she wrote, “if Santa gifted new and fair rules under which the PA House would conduct its business. Currently, too much power is controlled by the committee chairs, the majority leader, and the Speaker. Fairer rules would permit more legislation to be considered, and much of the legislation that never sees the light of day would serve our greater citizens well.”

We’ll give Jamie Wyper, president of Residents of the Shawmont Valley, the last word. “Days like last Saturday when it hits 68 degrees frighten me. My wish is for a winter with bite– at least 30 days of 32 degrees or less weather with plenty of snow.” Amen, brother.

Wishing you all a merry holiday and a Happy New Year.