The First Wildflower of Spring is Here! - Schuylkill Center for Environmental Education 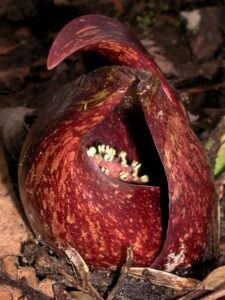 Skunk cabbage, one of the first wildflowers to bloom during spring, sprouting on our Ravine Loop.

In this weird winter of seesaw weather– 60 degrees one day, 20 the next with an inch of snow to boot– last week I walked the Ravine Loop in search of one of my Holy Grails, one of my key markers in the natural year’s calendar. I was searching for the very first flower of spring, one that appears as early as mid-February, the first flower in a long march that concludes in the late summer with goldenrod and aster, the tramp clowns at the end of the floral circus parade.

Walking down the loop from the Visitor Center, the trail makes a hard left at Smith Run, a beautiful stream on our property. And at that turn, there is a small wetland seep that is perfect habitat for skunk cabbage, a plant that needs its feet wet. I peeked and poked and hoped and looked– and, yippee!, there it was.

Skunk cabbage. A petite purple hood poking up through the wetland.

The mottled purple hood resembles something like the Sorting Hat from the Harry Potter universe. Incredibly, this hood is thermogenic, able to generate heat to melt the snow and ice around it. Temperatures around the hood are as much as 60° higher than the air around it. Crazy, no?

But that purple hood isn’t the flower. No, tucked inside the hood is a Sputnik-like knobby orb, rather Klingon-ish. Those knobs, unsexy as they are, are its flowers. And the flowers reek too, but a different smell, one akin to rotting flesh. This serves a huge purpose: attracting its pollinators, the flies and bees that scavenge on dead and rotting flesh. They crawl into the hood looking for dead meat, crawl over and across the yellow knobs, and accidentally pollinate the flower, a highly effective strategy.

And one of skunk cabbage’s pollinators is a blowfly with the wonderful species name of vomitoria. Need we say more?

The purple mottling of its hood is surprisingly common in the plant world, as lots of plants have learned how to imitate dead flesh as a means of seduction. Skunk cabbage belongs to the arum family, and its cousin, Jack-in-the-pulpit, employs the exact same trick to attract a different pollinator.

The heat it generates accomplishes multiple functions; it not only melts the ice around it, critical at this time of year, but also helps disseminate the smell. And pollinators are likely to come into the hood seeking that warmth. As I scanned the area for more hoods– I found at least four more coming up– I saw three different flies flitting around the area, one landing on a downed tree trunk to bask in the sunlight, as last Saturday saw temperatures pushing 60°. Was this its pollinator? Maybe. But it was one of the first flying insects I’ve seen this winter, the others out the day before, another warm day.

After blooming, its bright green leaves come up as well, some almost two feet long, their cabbage-like appearance lending the plant its name.

As if all this were not cool enough, the plant’s stems remain buried below the surface, contracting as they grow, effectively pulling the stem deeper into the mud. In effect, it is an upside-down plant, the stem growing downward. As the plant grows, the stem burrows deeper, making older plants practically impossible to dig up.

Want to see skunk cabbage yourself? (Of course you do!) Come to the Visitor Center and ask our receptionist for a trail map. Then hike through the butterfly meadow, turning right and heading downhill on Ravine Loop. When the loop makes that big left turn at its bottom where it hits Smith Run, stay alert. Turn left to parallel the stream, then look immediately on your left for the wet, soggy, muddy spots– and the hoods will be interspersed there.

At that same corner and all along this stretch of the Ravine Loop, skunk cabbage will soon be joined by a raft of stunning flowers, the more traditional spring wildflowers with bold colors and big smells that look to entice the first butterflies and bees of spring. They’ve got sweet names too: spring beauty, Virginia bluebell, trout lily, trillium, Jacob’s ladder, Dutchman’s breeches, Solomon’s seal. Colorful names. And great sights for winter-weary eyes.

They’re coming, I promise! But for now, come see the first flowers of the coming season. And, with Valentine’s Day behind us and the days growing longer, happy almost-spring.

This week in climate. The Beijing Winter Olympic Games began earlier this month, and while I’ve been enjoying it (especially, I confess, curling), skiing has been visually jarring, its slope in the first week an island of bright white floating in an ocean of dull snowless brown. Sports Illustrated reports that this year is the first time an Olympic host city has had to rely entirely on artificial snow. And according to researchers from Canada’s University of Waterloo, February temperatures in the 19 previous Winter Olympics host cities since 1950 have risen considerably, those cities seeing an average of a 4.8° rise in temperature; over that same period, Beijing has warmed a whopping 8.9°. If high carbon emissions continue, the study concludes, of all the prior Olympic venues, only four will be climate-reliable locations by mid-century, and only one late in the century. Artificial snow will likely become the norm.

As a response to this threat, winter athletes– skiers, lugers, bobsledders– have in turn started their own environmental advocacy group, Protect Our Winters, a wonderfully welcome yet unlikely member of the growing coalition of concerned voices on climate.

One thought on “The First Wildflower of Spring is Here!”