The Life, Death, and Rebirth of a Great American Tree - Schuylkill Center for Environmental Education 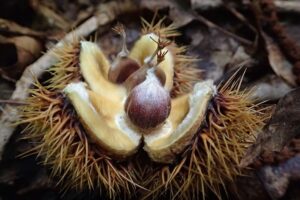 A chestnut tree showing its open bur and those famously alluring fruits, craved by both people and a diverse assemblage of animals, from deer to passenger pigeons. Photo courtesy of the American Chestnut Foundation.

But you won’t see any American chestnut trees, once one of the most common trees in a Pennsylvania forest. They were wiped out in rapid-fire assault at the start of the century.

Sara Fern Fitzsimons, American Chestnut Foundation director of restoration, is a leader in an army of scientists and foresters working to bring them back. And therein lies a story.

On Thursday, March 10 at 7:00 pm, we have a unique opportunity to hear Sara tell you this tree’s extraordinary story in a free Zoom lecture. It’s also our 11th annual Richard L. James Lecture, named for our founding executive director. Registration can easily be done here.

In the late 1800s, four billion chestnuts grew in the eastern US, fully one in four trees in a Pennsylvania forest. They were among the largest, tallest, and fastest-growing trees, with straight-grained, rot-resistant wood used for furniture, fencing, and building. Its famous nuts fed billions of wildlife, people, and their livestock– including the passenger pigeon, whose massive flocks combed the forest floor in search of chestnuts, not to mention acorns, hickories, and beechnuts.

Long before this, the Lenape burned our forests on a regular schedule to keep forests in earlier stages of succession and keep nut trees like chestnuts, acorns, and hickories. The nuts not only fed the First Nations people, but supported a larger population of deer and turkey, two animals central to their diet. Penn’s Woods was hardly a pristine wilderness; instead, it was actively managed by the Lenape, skilled forest ecologists– and chestnuts were central in their long-term plans.

“It was almost a perfect tree,” concludes the American Chestnut Foundation on its website.

Tragically, dead chestnut trees were first discovered in the Bronx Botanical Garden in 1904. A fungal blight had been accidentally imported from Asia, where that continent’s species of chestnuts had evolved alongside the fungus and were resilient to its impact. The American species, however, encountering this novel threat for the first time ever, simply had no immunity, and quickly succumbed. The fungus spread like wildfire, reaching Philadelphia in 1908 and rippling across the northeast. The American Chestnut Foundation calls it, without exaggeration, the “greatest ecological disaster to strike the world’s forests in all of history.”

The foundation’s elegy, concludes, “The American chestnut tree survived all adversaries for 40 million years, and then disappeared within 40.”

Despite its demise, the tree is not extinct. The blight doesn’t kill the underground root system, as the blight is unable to compete with soil microorganisms. Stump sprouts grow vigorously in cutover or disturbed sites where there is plenty of sunlight, but inevitably succumb to the blight. This cycle of death and rebirth has kept the species alive, though considered functionally extinct. The foundation carries out an active breeding program to breed blight-resistant hybrid chestnuts, and also uses high-tech biotechnology and biocontrol as well. The foundation hopes to restore the American chestnut to its storied place in the American landscape.

Will they succeed? Come see. “I hope people coming to the lecture,” notes Sara, “take away the incredibly fascinating scientific work behind restoring the American chestnut and the equally fascinating people behind the work, including volunteers and citizen scientists, and an understanding that our forests are under great pressure from non-native pests and disease. The success of the American chestnut restoration can lead the way toward rescuing those other threatened native forest trees.”

Her foundation has planted 500,000 disease-resistant chestnuts already. What would she like people to do after the lecture? “Plant trees!” she answered.

The Richard L. James Lecture is named in honor of our founding executive director, who led the center for 31 years from our 1965 founding through his 1996 retirement. He also wrote a column in The Roxborough Review for many of those years and offered weekly weather commentary on WFLN-FM, the long-gone radio station on Ridge Avenue alongside the Roxborough Church. In fact, his on-air weather commentaries, heard by Roxborough’s own David Montgomery, then a young and rising executive within the Phillies in the early 80s, led to Dick serving as the baseball team’s meteorologist. Dick would spend many a summer evening staring at his weather radar while on the phone with David, providing updates on when that thunderstorm would pass over South Philly so the game could resume. Dick had a huge presence in both Roxborough and the Delaware Valley.

The lecture also kicks off the Center’s Year of Restoration, with special programs and events occurring throughout the year– watch for them. In the meantime, join us Thursday, March 10 at 7 p.m. via Zoom for Sara’s lecture on this “almost perfect tree.”

5 thoughts on “The Life, Death, and Rebirth of a Great American Tree”