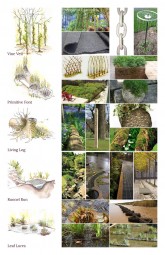 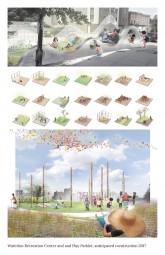 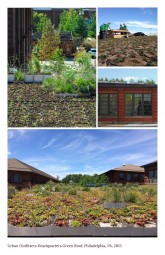 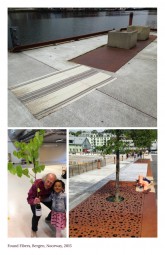 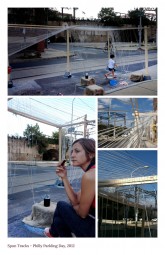 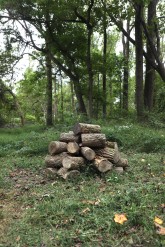 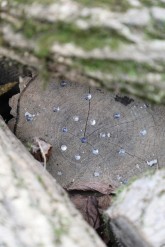 Kate conceived a collection of mythic micro-environments – called Synestates – to thoughtfully insert materials or elements from the cityscape into SCEE’s wild and managed lands, speculating about future possibilities for contact between people and the environment. Synestates played on the concept of synesthesia, whereby the mind correlates one category of abstract information with another. These works brought cognitive dissonance into the “forest bath” at SCEE, reminding visitors that being outside immerses one in a world of cognitive differentiation. The project combined conventional hard urban materials and synthetic interfacing with living and/or decaying organisms. Subsequent human contact was eagerly anticipated! dolmbale is a collection of floating forms that represent abstractions of Philadelphia’s most prevalent non-point-source (or non-industrial) water pollutants: Phosphorous, Nitrogen and Salt. The floating pieces are in dialogue with others installed along Smith Run, downstream of Wind Dance Pond, where buoys mark the locations of leaf pack experiments. During fall 2018, samples of water-dwelling insects were counted and sorted using the methodology of the Leaf Pack Network. While the presence of water-dwelling insects that are sensitive to pollution indicates healthy stream water, the dominance of less sensitive orders correlates to poor water quality. pvines consists of an installation of steel chains that are attached to the ground and to low branches of two invasive Amur Cork trees. A thin strip of capillary fabric – a material with amazing moisture wicking abilities, often used in green walls – winds up the length of coated chain, accented by stars made from white drinking straws and zip ties. Virginia creeper, a vine native to this area, is planted at the base of each chain. This sculpture seeks to determine whether a rain chain can be combined with capillary fabric to confer growing advantages to a climbing, suckering vine. urlog was a low stack of logs drilled to host native pollinators, and decorated with reflective glass studs. The drilled hole apertures were intended for leafcutter insects and other native wild bees, wildlife whose nesting grounds are often displaced by human development. By offering bee homes that point in all directions, this sculpture revealed whether pollinator guests showed preference for height or aspect (north vs. south) in this area. Different bee species also became active at different times throughout the day, just like the reflective parts of this sculpture: you could shine your flashlight on the glass studs to feel the warm glow of environmental observation reflected back at you!

Kate Farquhar is a Philadelphia based artist and landscape architect, whose work combines her artistic interests with her apprenticeship in cutting edge green infrastructure.