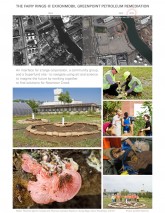 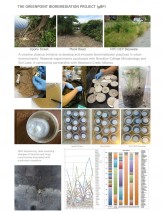 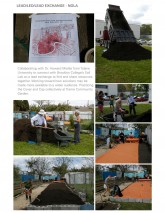 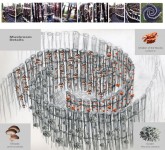 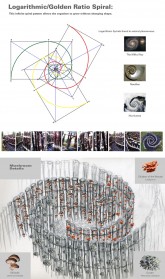 Jan Mun is a media artist that creates social sculptures working with digital and living media. The landscape has become her framework to unfold stories about others and herself by using a combination of artistic and scientific processes that manifest in the form of interactive installations, photography, performance, and bio-art. Jan creates interfaces to elicit participation as a reflection and critique of our political and social systems. Working with communities such as Newtown Creek Alliance, BeeVillageNYC, NYC Mycological Society, and the Soil & Microbiology labs at Brooklyn College Jan innovates ideas to be realized through research, chance, and collaboration.

As a LandLab artist, she explored mycoremediation and shared her passion for mushrooms as “ecological instigators,” ultimately constructing The Mushroom Vortex Maze. The Mushroom Vortex Maze was constructed using wooden logs inoculated with three types of edible mushrooms to create separate rows that each forms a logarithmic/golden ratio spiral. By entering the maze to forage for mushrooms you could easily be dislocated at the center and exit from a different path than where you entered, changing your trajectory. Along the center of the spiral all three types of mushrooms were available, and, as is the case when this pattern is found in the natural phenomena, the center where you stood was also where the pattern was infinite.

The interaction within the Mushroom Vortex Maze was based on cultivation and our biological instincts for food; one is lured into the vortex maze to forge for food or simply out of curiosity. Foraging for mushrooms in the United States is discouraged due to risks of mistakenly eating poisonous species and the lack of knowledge to know the difference. This is one indicator of our dislocation to the natural environment toward a built environment. In the Mushroom Vortex Maze, a dialogue with these two relationships was created as another option to foster a symbiotic relationship the between natural and built environments. Artist’s rendering of “The Mushroom Vortex Maze” by Jan Mun Mushrooms can be magical discoveries in the forest, but they only represent the fruiting body of a much larger organism that exists underground. The filamental root-like systems are unseen, but play an important role in the health of an ecosystem. Mycorrhiza (myco meaning “fungus” and rhiza meaning root) are a symbiotic relationship between a fungus and a plant that benefits both. When the underground fungus communities are not present in a forest, trees are less healthy.

Jan specializes in working with fungi – cultivating mushrooms, using them  in industrial remediation projects, and more. To create The Fairy Rings: Mycorrhizal Relationships, she worked with the Schuylkill Center’s land management staff to add soil amendments containing mycorrhizal fungi to selected trees in our Pine Grove, some just planted this year, others that have been growing here a long time. The mulched rings around the trees identify which trees have received the beneficial treatment, add additional nutritional benefits to the trees, and visually guide visitors on a meandering path through the grove. She also added pink oyster mushroom spawn to the mulch, which are edible and may bloom this season – see if you spot any.

Over time, we will be able to observe how the health of the treated trees differs from the untreated trees. Mun’s project benefits the trees in Pine Grove while making more visible the critical underground networks of fungus and tree roots.