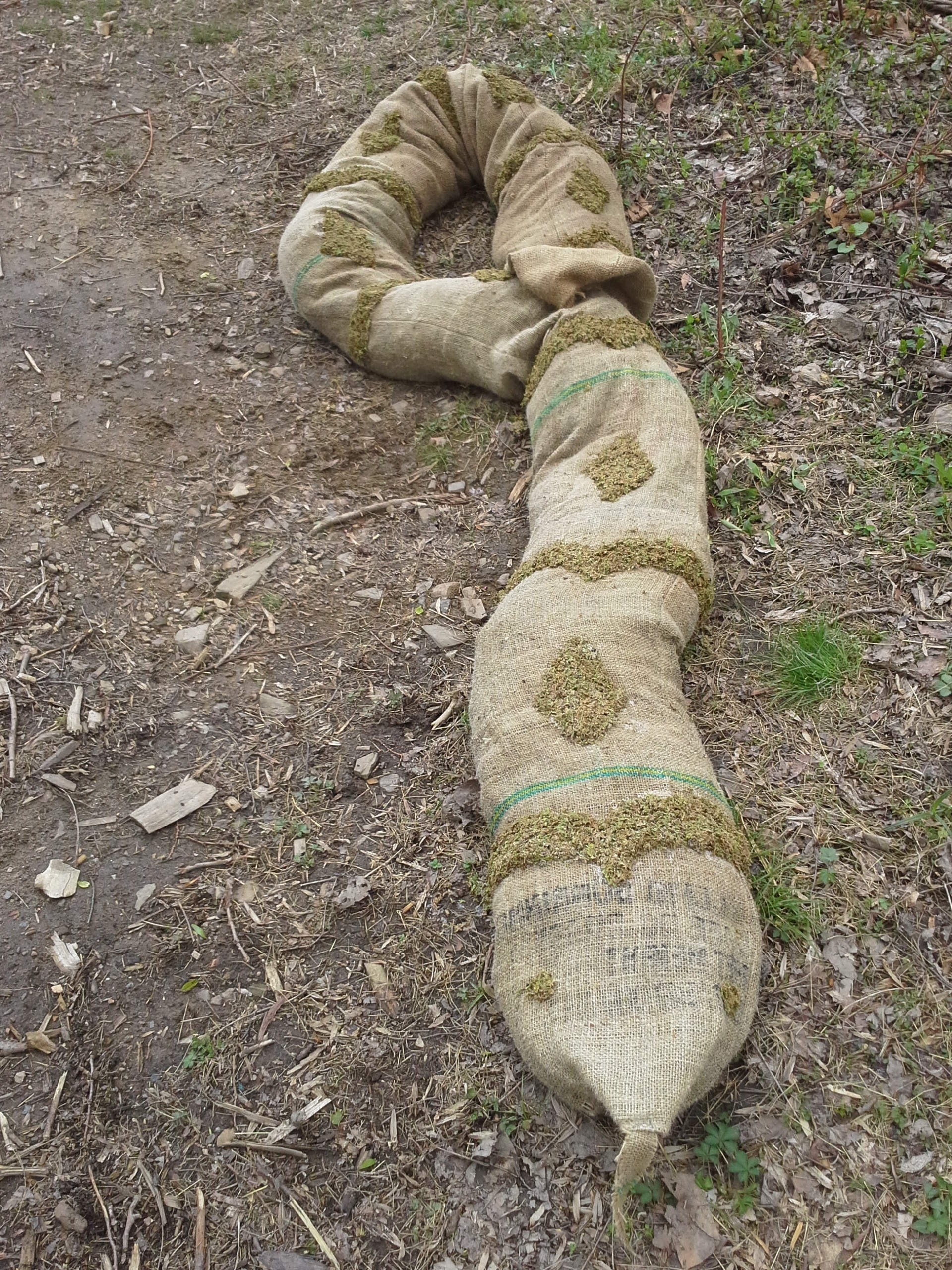 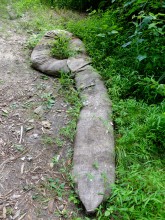 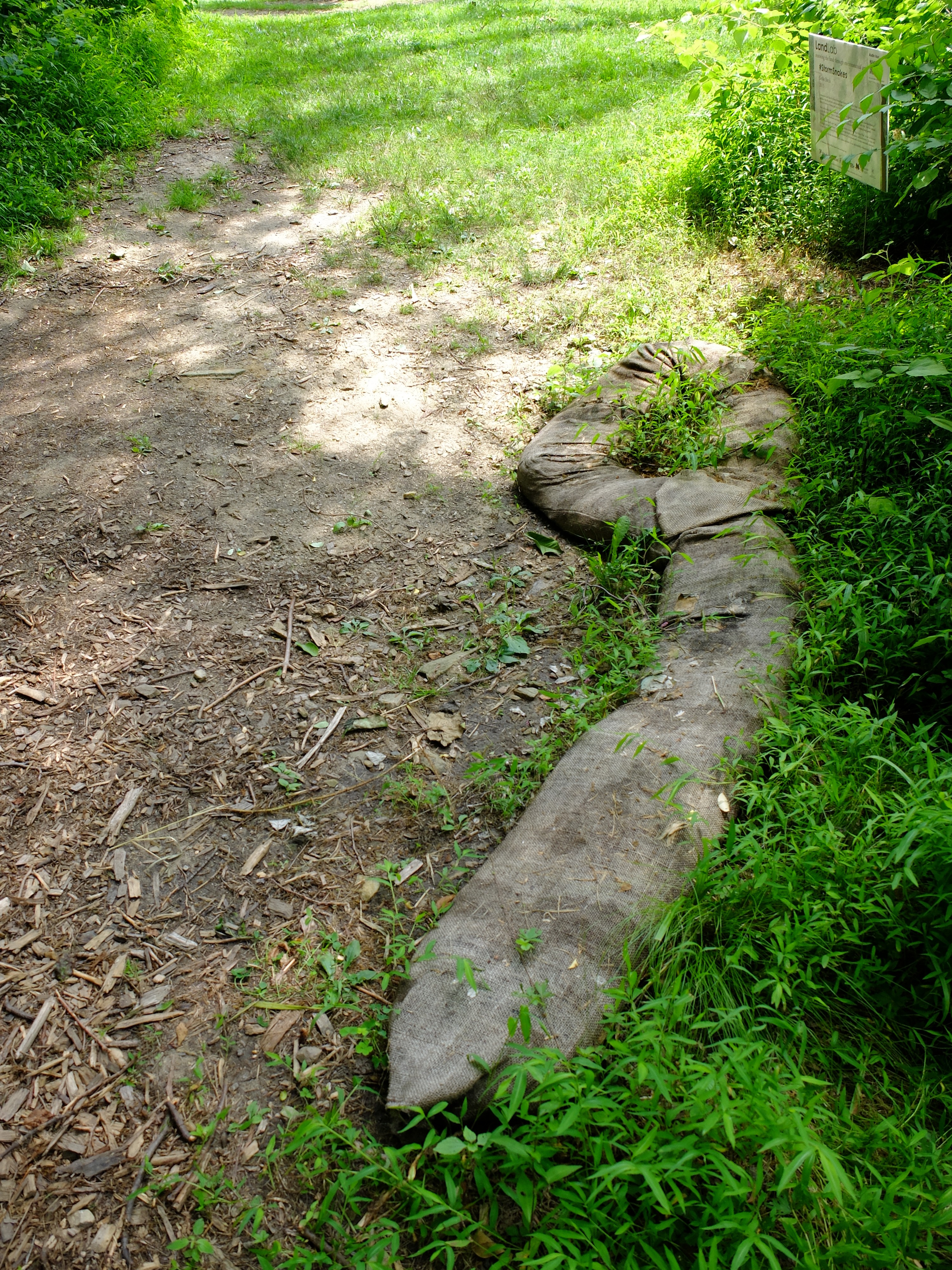 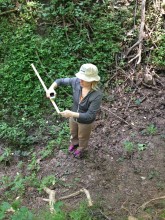 #StormSnakes, by Leslie Birch, explored the issue of stormwater run-off using electronics to collect data from a SCEE stream. Partnering with Stroud Water Research Center, she created a cost-effective DIY sensor that collects data on the impact of stormwater on streams at SCEE. She also created burlap snake sculptures to stop and slow runoff and decrease erosion. #StormSnakes examined the problem of storm water run-off.  Storm water run-off is hard to control and is constantly manipulating the environment. It carries pollutants like oil, pesticides and nutrients along the way. Water erodes the stream bed, causing the stream to change path and trails to collapse. On a bigger scale, the Schuylkill River watershed is connected to the Delaware River watershed – think of our water being joined by all of our neighbors’ water, so what affects one waterway affects all waterways and leads to our drinking water.

#StormSnakes uses a tag team of technology and art to measure and combat this problem. A stream monitor created with an Arduino datalogger, solar cell, and sensors monitors water depth, temperature, and conductivity. Measuring these changes in conductivity can help indicate different types of pollutants in the water. With the help of Steve Hicks at Stroud Water Research Center who custom designed the monitor, this stream monitor collects and transmits data allowing information to be gathered in real time. The monitor also has the capability to Tweet data, creating public awareness of this issue and reminding us about our role in keeping water clean. As I built the monitor, I documented the process, which will be posted as a tutorial on their EnviroDIY site.

“Storm Snakes” are also installations that help absorb and slow down storm water run-off. The snakes are constructed using recycled coffee bean sacks from La Colombe stuffed with bark chips, coir (coconut husks), and rocks. The snakes have another use:  they naturally break

down over time helping the environment as food for microbes, encouraging fungus growth. In fact, microbes became another interesting area for me to explore on this project, and the snakes have been “tattooed” with a mixture of moss slurry. Not only does this moss slurry encourage green growth for a snake-like pattern, but it also allows for other living things to alter the surface. The snakes were lovingly put together with the help of Brenna Leary, a recent Environmental Ed grad who loves all things dealing with nature–from worm farms to brewing beer.

It will take far larger measures to truly make a dent in the issue of storm water run-off, however the stream monitor will provide ongoing data that will serve as proof of the magnitude of the water and pollutants hitting the Schuylkill Center for Environmental Education’s waterways. My hope is that this data can be used for future grant writing to secure a system that will lead to a sustainable solution for the storm water run-off on the property. As for the snakes – they will gradually decompose and encourage people visiting the property to begin asking the right questions and become stewards of their own water. I’m a tech artist hoping to use my skills to create moments when people are present.  Whether that is experiencing rain through an LED umbrella or feeling like a spider with a musical yarn web, connectivity allows us to realize we are in this world together.  On the environment side, I’m a birder and letter-boxer, so I’m often hanging out at parks.  The Pileated Woodpecker is my favorite bird.

I come from many art backgrounds, including poetry, theatre, dance and film.  Oddly, I’ve fallen in love with programmable electronics.  I’m often incorporating them into wearables and other projects.  The piece you see here, Valentine’s Pi, is a Twitter device that follows @LoveQuotes and also lights up when you give it a specific hashtag for your loved one.  It uses a Raspberry Pi circuit board that is similar in size to the Seeeduino Stalker that will be used in the stream monitoring device.  They have different capabilities, but they are both controllers that allow you to program.

My LandLab project is very meaningful to me because it marks my first step into using my tech skills to advocate for the environment, something that has always been important to me.  There are serious issues concerning water across the world, and if we don’t do something about them soon, only a few will have healthy drinking water.
Hear Leslie speak about her project at http://spts.us/schuylkill-center/-/leslie-birch.

For more information about Leslie Birch, visit her website here.