The Schuylkill Center
LandLab: WE THE WEEDS
Blog 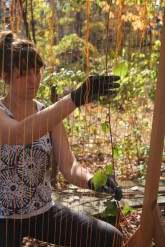 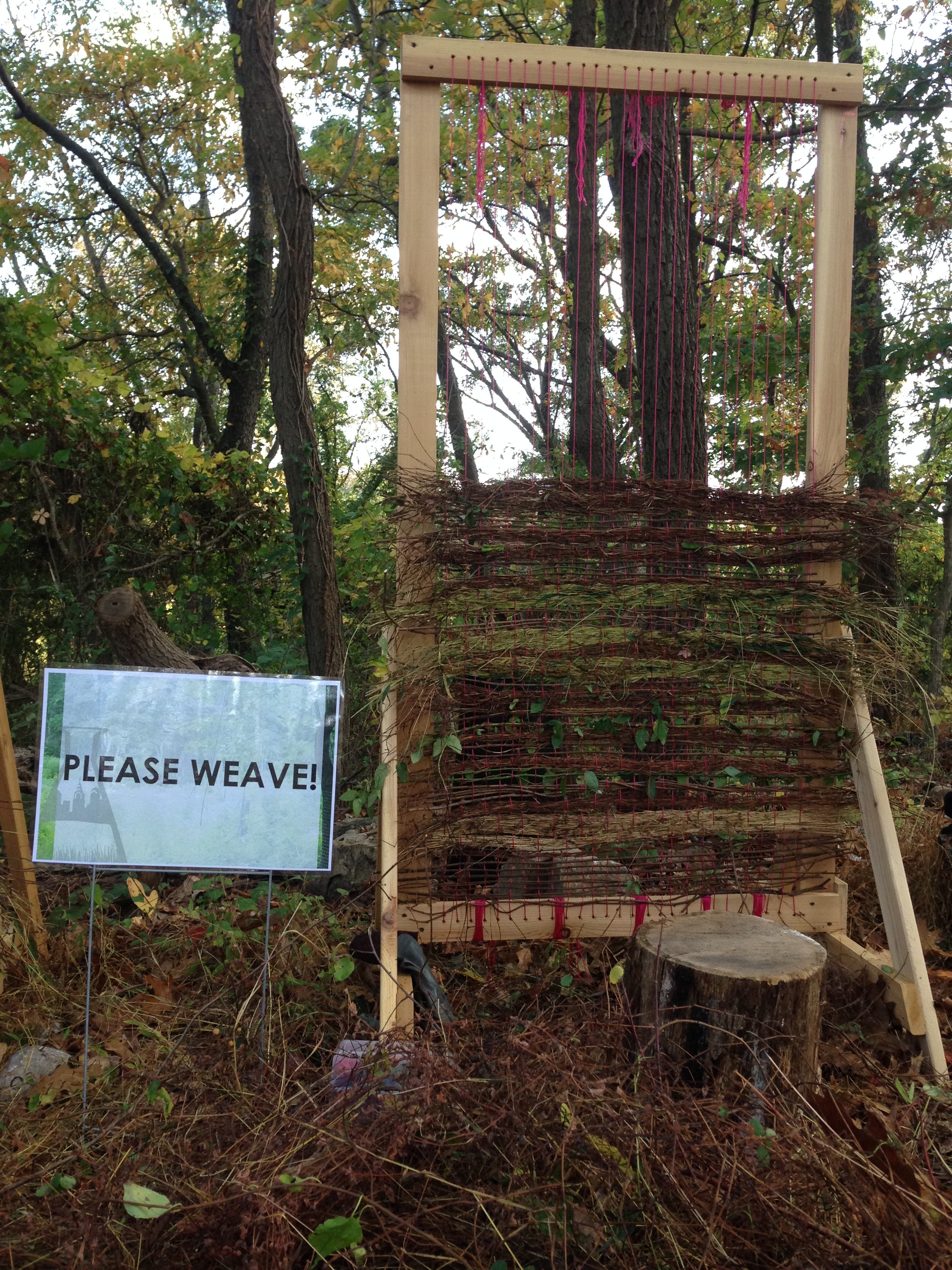 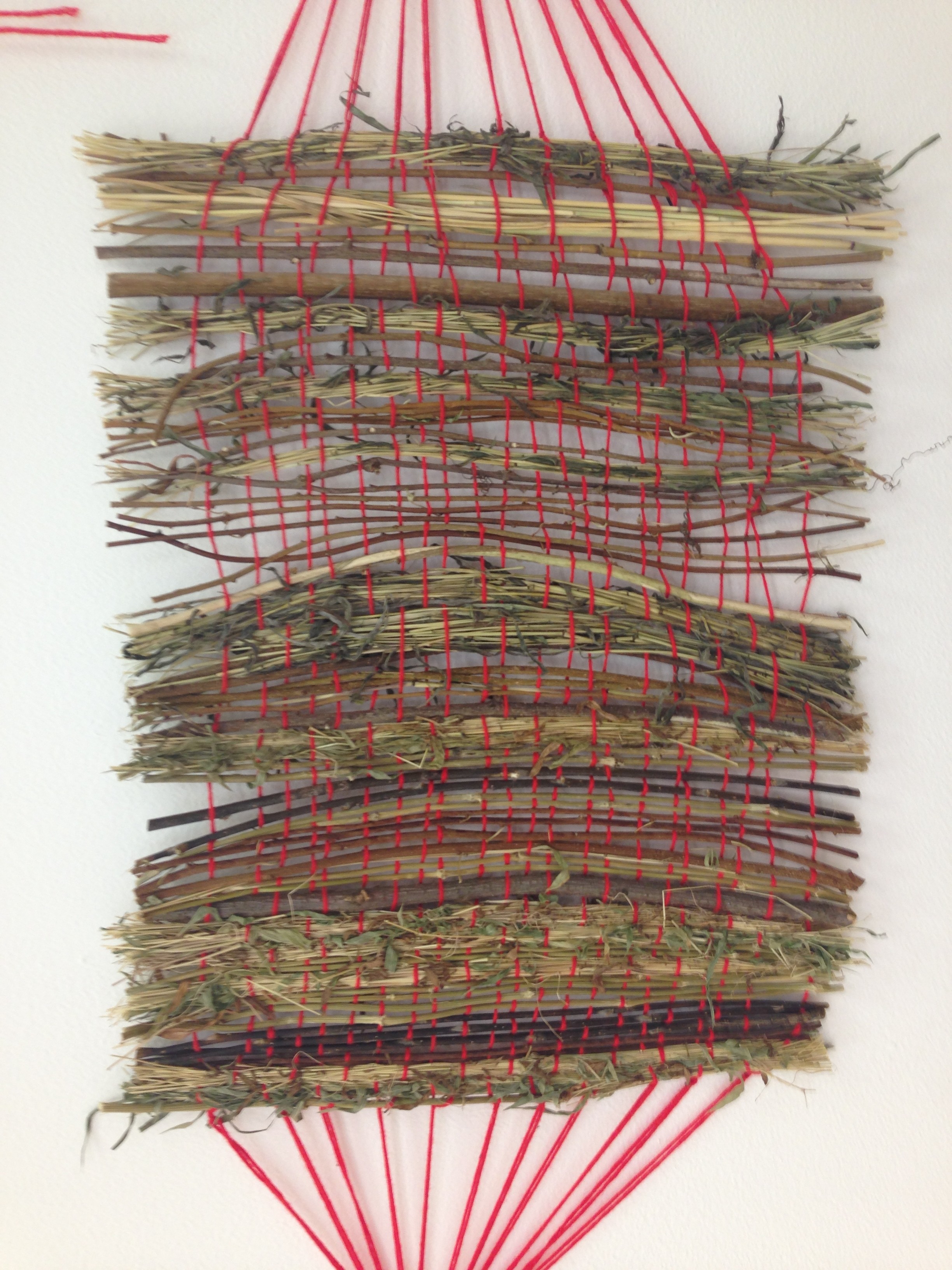 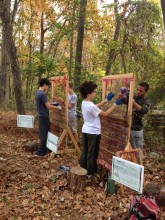 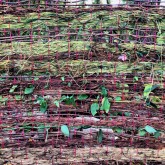 WE THE WEEDS: Kaitlin Pomerantz and Zya S. Levy WE THE WEEDS (a collaboration of artist Kaitlin Pomerantz and botanist Zya Levy) created a woven installation constructed from invasive vines, simultaneously encouraging dialog about the global movement of plants and removing hazardous invasive species from the forest. They harvested and wove with invasive vines on two large hand-built looms with SCEE visitors of all ages. The completed weavings were installed as one large work, called “Interwoven,” in a vine-dominated meadow at SCEE, where the living vines consume their tapestried counterparts.

For the LandLab Residency, we built a woven sculptural installation made from invasive vines that explores the interwoven histories of humans and plants, and their mutual global migrations. The work creates an opportunity for dialogue about the perception and management of invasive species, the impact of human disturbance of plant populations, and the harms, as well as benefits and uses, of invasive plants. Our process began with an investigation of flora on the Schuylkill Center property.  Botanical surveys in the spring and early summer resulted in a list of common plants, including natives like the May apple and black cohosh, and non-natives like wineberry and oriental bittersweet.  The plants we observed on the Schuylkill Center property act as a snapshot of history up until this point: the presence of many of the invasive species tells of habitat fragmentation, pollution, material desires, while the re-establishment of many native species speaks of a renewed interest in being responsible stewards of the land. WE THE WEEDS is a botanical arts initiative aimed at expanding knowledge of the wild plants of Philadelphia, headed by artist Kaitlin Pomerantz and botanist Zya S. Levy.  Past projects include a variety of ethnobotanical art interventions highlighting the presence of the natural world within the manmade landscape, and illuminating the uses, historical and cultural significances of wild urban flora (weeds!).

Having completed the majority of our projects in inner-city Philadelphia, the Schuylkill Center presented a unique opportunity for us to explore the ethnobotanical conditions of a more “natural” habitat.  Deciphering what plants are native to the area, what plants came with agricultural advent, and which plants are the results of greater environmental disturbances has been a pleasurable challenge for us.  The work on display in this exhibition shows some of our thought process as we have begun to respond to this site.  Photographs of vine matter express our interest in the aesthetics and growing power of these colossal plants, who conquer human architecture as a biological imperative.  Collected vine material, preliminary weavings, and our early looms show our exploration into the processes we will use to create our final installation. Hear WE THE WEEDS speak about their project at http://spts.us/schuylkill-center/-/we-the-weeds.

For more information about WE THE WEEDS, visit their website here.

For more information about Kaitlin Pomerantz, visit her website here.

Gazing Upwards to See Backwards: A Look at Local Vines and Their Origins (July 8, 2014)