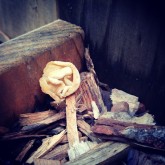 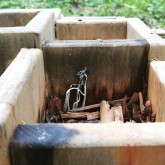 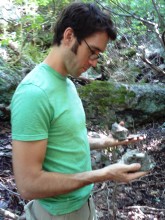 Jake Beckman explored the detritus and soil formation cycle of a forest and its disruption by invasive earthworms, creating a sculptural installation that makes these hidden processes visible to visitors. His wooden sculptural installation “Future Non-Object #1: Sol’s Reprise” is inoculated with local fungal spores, which will break down the sculpture over time and enrich soil health. Rot and decay are such an important part of the healthy life cycle of a forest, and yet for various reasons they are hardly ever celebrated.   My project will attempt to shed light on these processes through research, workshops and the creation of several data-inspired sculptural installations. These sculptures will explore themes of decay and regrowth and will hopefully exist as quiet meditations on the cycle of detritus found in the forest. Where do the raw materials of life come from? What happens to “waste” in the forest ecosystem?  How can the components of soil affect the health of an ecosystem?  As part of my residency exploring the ways in which dead organic matter is broken down and reincorporated into living organisms (a cycle called the detritus cycle), I looked closely at the essential role that fungus plays in the forest ecosystem.  For instance, dead wood would remain utterly indigestible to the vast majority of forest organisms without fungi to break down the complex molecules of cellulose, hemi-cellulose and lignin.  Rotting wood and its associated fungus can be seen throughout the grounds of the Schuylkill Center.  Interestingly however, the fungal biodiversity in the part of the forest where my project is installed has been disturbed by, among other things, the presence of invasive earthworms and their voracious appetites for organic matter.  Is there potential for remediation?  By collecting fungal species from other healthier parts of the forest, introducing them into the sculpture, and collecting data over time, I’m curious to see if some measurable degree of biodiversity can be restored to this part of the forest.

As research progressed, I began to also look at the way in which inorganic material such as rock becomes integrated into soil through a slow process of fragmentation and dissolution via chemical, biochemical and mechanical means.  I became fascinated by the layering of timescales that co-exist in soil, from the geologic scale of eons and millennia to the more organic scale of centuries, decades, years and months.   On one level, my project is simply an outgrowth of the wonder I felt when learning about the complexities of soil.  When I began my research, I was quickly reminded that nothing in the forest is “wasted.”   Bacteria, fungus, plants, animals and all other manner of organisms work to glean nutrients from what is cast off or left behind when another life comes to an end. I wanted to create an object that contained the seeds of its own undoing (an intention that runs counter to more typical considerations of a material’s archival qualities).  As such, throughout the summer and fall, the wooden pile structure I have created will be inoculated with various species of fungus that I find on the grounds of the Schuylkill Center.  Over time the sculpture will give rise to successive fungal blooms, slowly being consumed and reabsorbed back into the environment. I am a sculptor and educator living and working in Philadelphia.  I was born in Cleveland, Ohio, and grew up minutes up the hill from the city line in Cleveland Heights.  I teach Art and Design at the Community College of Philadelphia and graduated with an M.F.A. in Sculpture from the Rhode Island School of Design and a B.A. in Art from Swarthmore College.  In addition to making work that explores systems and materials that sustain our way of life through a wide range of media, I have had a lifelong interest in biology, chemistry, and many of the other physical sciences.

Hear Jake speak about his project at http://spts.us/schuylkill-center/-/jake-beckman.

For more information about Jake Beckman, visit his website here.