Jebney Lewis was among one of the artists that considered agricultural and cultural conditions that once existed at the farm at the time it was active.  Working with mathematician Todd Parsons and fiber artist K.R. Wood, Lewis explored concepts of environmental shift by repurposing readily found forms and objects in the natural landscape.

Gathering materials from the Schuylkill Center’s grounds, Lewis built a topography of the land that echoes its historic transitions from native forest, to farmland, and back again to forest.

This work focused on the ways environments can rapidly change without prior warning and our inability to anticipate how much longer it may take them to change back. Jennie Thwing presented The Brolo Hill Project, a performance, an installation, and a corresponding film. Thwing’s work was loosely based on the daily lives of the Lenni Lenape tribe and early pioneers that lived in today’s Upper Roxborough.  The film was shot on location at Second Site and then screened at Nexus Gallery.  Tents were lit from the inside for the opening event performance. The film depicts the “living forest,” an idea based off the Lenape Indian belief that all animals and plants have spirits.  The work combines historical reenactment and personal experiences to respond to the physicality and history of the land.

When we explore a natural site like the Schuylkill Center we often focus on “natural beauty” as a purely visual experience.

In Aeolus, Michael McDermott wanted to invite the viewer/listener to notice the audible beauty of nature. 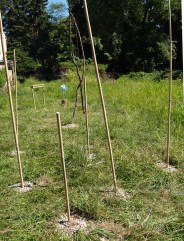 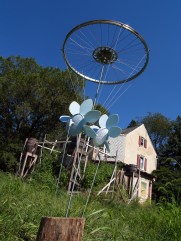 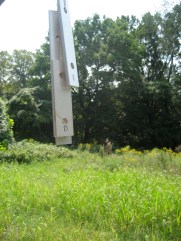 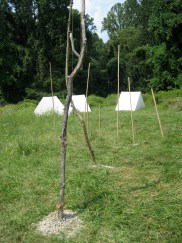 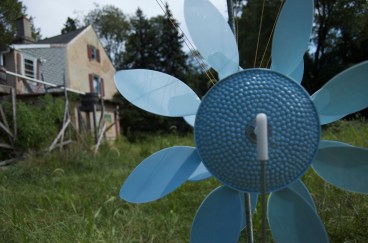 By creating wind sculptures that gently make noise in the wind, the artist beckoned the listener to focus their sense of hearing to appreciate the overwhelming subtlety of music created in every instant of the natural world.  In the accompanying performance of Aeolus for the opening reception, four musicians echo the sounds of the sculptures.  Using guitar, violin, percussion, and flute, the work explores the tension between the chaotic and unpredictable sounds of nature and controlled calculated sounds of man.  The original music score hoped to blur the line between these two dichotomies and create musical balance between natural chaos and order.