The Schuylkill Center’s Board of Trustees has announced that several potential opportunities for preservation have recently been presented to the organization. As a result, the Center is indefinitely suspending its request for proposals to develop the Boy Scout Tract.

The Board is enthusiastic about pursuing potential preservation options, as the organization had tried several times in the past decade to preserve the site. While no proposals have yet been received from conservation-minded developers or individuals, and the date for filing proposal applications is still several weeks away, the group is immediately pausing the process to prioritize the exploration of potential preservation possibilities.

We also welcome the offer to work with conservation-minded groups and individuals in the community who have ideas on identifying additional preservation options.

We hope to announce further news about the preservation of the site in the weeks ahead.

The Schuylkill Center for Environmental Education announced two months ago that we were exploring the potential sale of 24 acres of land to fund a number of transformational, once-in-a-generation initiatives among them: investing in our staff who bring the Center and the land to life, education programs, and aging infrastructure including our wildlife clinic, the only rehabilitation facility in the City. Unfortunately, this announcement has upset many of our neighbors and civic partners. I’m hoping that a more thorough explanation may address their concerns.

Most importantly, we have made no decision to sell; our Board of Trustees is simply exploring all of its options, and has released a Request for Proposals (RFP) packed with conservation requirements. The deadline to receive a proposal is late September, and any decision, even to sell the land at all, is many months away, and if the board does not receive a satisfactory proposal, we will not sell.

As part of this process, we are simultaneously exploring the interest of potential donors, grantors, and community leaders to preserve the entire tract. Though the work is still unfolding and the outcome is uncertain, we hope to have an update in the near future to share with our members and the community. This possibility is our organization’s priority at the moment, without question, and if this succeeds, we sidestep the proposal process completely.

Lost in the discussion is the fact that the Schuylkill Center has already permanently protected 420 acres of open space in Roxborough, more than any other entity. Our 340-acre campus in Upper Roxborough, comprising forests, fields, streams, and ponds, is under a permanent protective covenant, the largest privately protected open space in the City of Philadelphia. Back in the 1980s, we sold an additional 80+ acres to the city to be merged into Fairmount Park, also permanently protected. And if we sell the Boy Scout Tract, at least 12 of its 24 acres (and maybe more) will be protected too, resulting in 432 acres of protected land.

Turning to the RFP, we built numerous conservation safeguards into the document, like a conservation easement permanently protecting the steep slopes and floodplain. The easement is a legal agreement that permanently limits uses of the land in order to protect its conservation values; this will likely be a unique easement in that it requires a wooded corridor for the safe passage of  migrating toads. We also ask that the floodplain, stormwater, and steep slopes measures exceed the city’s requirements, and that any development fit into the character of the neighborhood.

All of our trustees share a commitment for our twin mission of environmental stewardship and education. If we sell, we are seeking to leverage this possibility into an investment in our organization and its staff, in alignment with our strategic and master planning.

We continue to welcome your thoughts and engage in open dialogue. Please send your comments to us at boyscouttract@schuylkillcenter.org. The Center’s staff is collecting all input and sharing this information with the Center’s leadership and Board.

The Schuylkill Center owns 364 acres of mostly forested land in Upper Roxborough, and uses its core holdings of 340 acres for its environmental education programs. On this core property– bounded by Port Royal Avenue, Hagys Mill Road, Spring Lane, and the Schuylkill River Trail–  it accomplishes its mission of connecting people with nature. These 340 acres are permanently protected by a conservation easement held by Natural Lands– land that will never be developed, and the largest privately protected open space in the City of Philadelphia.

In addition, we sold 80 acres of the Manatawna Farm, a site that includes the Community Organic Gardens, to the City of Philadelphia in the 1980s, where it was merged into Fairmount Park as permanently protected land.

In short, the Schuylkill Center has preserved 420 acres of open space in Roxborough, and is very proud of this accomplishment.

The Center also has long owned the 24-acre Boy Scout Tract, given to it by one of its founding families to use as needed. But the Center has been unable to use this land for its core education mission: it is too far from the Visitor Center, and across a road, another barrier. In more than 50 years, no programs have occurred there, and the Center lacks the financial and staff resources needed to maintain the site. Knowing the Center cannot use it programmatically, the Boy Scout Tract was not placed under the 2010 conservation easement that preserves its core holdings.

The Board of Trustees has announced that it is seeking conservation-minded proposals from developers and/or private individuals to purchase the site for limited development, looking to balance its financial needs with environmental and community needs. 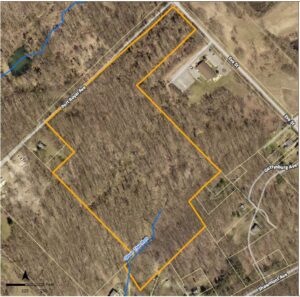 An aerial photo of the Boy Scout Tract, showing the Higher Ground church on Eva Street on the right and a 19th-century home on the left. Green Tree Run flows across the bottom of the photo. 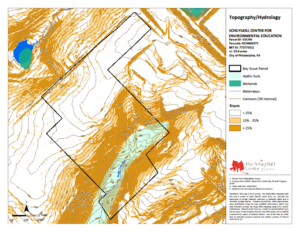 What is the Boy Scout Tract?

Named for a time when Scouts camped on the site, the Boy Scout Tract (see aerial photo) is a 24-acre parcel of land in Upper Roxborough located south of Port Royal Avenue and fronting on Eva Street and Port Royal Avenue. There are no improvements on the tract, and it is forested property

Why is the Center looking to sell the parcel now?

The Center has a lengthy list of capital needs that it has been working diligently to address for the last decade (see the answer to the next question for more details). Given that we have weathered the pandemic’s storm of the last two years, we are finally shifting back into long-term strategic and master planning, and this parcel plays a key role in offering us some of the financial resources we need to more effectively meet our mission.

We have sold portions of this tract in the last 40 years, 1+ acres to a private homeowner who lives alongside the tract and later a 10-acre parcel on Eva Street to a nonprofit church. In 2022, after receiving an inquiry of interest into the property’s sale, the Board of Trustees agreed to send a Request for Proposals to interested parties to explore the possibility of limited development.

What will the Center do with the funds?

The Center has identified a very long list of capital improvements that would allow us to more effectively meet our mission. In 2015, we created a Vision 2025 plan for projects we hoped to accomplish in a 10-year window; we then identified at least $5 million of improvements, a number that has only increased in the intervening years.

For example, we need to overhaul our tired nature museum, adding interactive exhibits on topics like wildlife rehabilitation, climate change, water, forest ecology, biodiversity, and more. We are also exploring the option of expanding our nature museum into another wing of the building, effectively doubling the museum’s size.

Our nature playscape, used by all of our children’s programming, including summer camp and Nature Preschool, is unfinished, and its new design needs additional funds to make it the community attraction we desire. We see an expanded and renovated museum and accompanying playscape serving as a regional attraction, bringing new people to the Center. The new museum will even bring families here on rainy weekends.

We also need to build new cages at our Wildlife Clinic to replace aging and failing ones, especially a flight cage for birds of prey like hawks, eagles and owls, and an outdoor cage for mammals like raccoons.

Why isn’t the Center preserving the Tract?

If proposals come to us purchasing the land for preservation, the Center will absolutely consider those proposals.

Are there conditions or restrictions for the sale of the Tract?

Yes, many. First, the Center is seeking proposals for limited conservation-minded development that can be done without variances or special exceptions. Second, the Center will protect the site’s steep slopes and the Green Tree Run stream through a perpetual conservation easement. This second requirement alone ensures that at least half of the site will be permanently protected open space.

How is the land zoned?

The property is zoned RSD-3, Residential Single Family Detached District. Zoned to look like much of the adjoining neighborhoods, RSD-3 districts are intended to accommodate detached houses on individual lots. Single-family dwellings do not require zoning approval.

Under the current by-right zoning, more than 80 units could be built by right; the Center will not entertain proposals that develop the site at that level of intensity.

What about trees, wildlife, and habitat?

The Center recognizes that there will be an environmental impact resulting from any development that happens here, even limited development. However, with much open space surrounding the tract and much as half of the tract being permanently protected as habitat, wildlife will shift to adjacent open spaces, including the Schuylkill Center. This will greatly mitigate the development’s impact.

How will this impact toads crossing Eva Street to mate in the reservoir?

The Schuylkill Center sponsors Toad Detour, our volunteer program to assist American toads, some of which come from the Tract, in migrating across Port Royal Avenue and Eva Street to the reservoir preserve, where they mate in early spring. We will include in our agreements the requirement of a viable forested corridor to Eva Street that migrating toads can use to cross the street every spring.

How will the Center select a proposal?

The Center’s Board of Trustees will evaluate the proposals based on multiple criteria (this list is in no particular order): percentage of the Tract to be conserved; how the proposal addresses environmental concerns including, but not limited to, stormwater, soil disturbance and tree removal; suitability to the neighborhood; the developer’s track record and credibility; the price offered to the Center; and any additional criteria determined by the trustees.

When will the Center select a proposal?

We released the RFP in July and are accepting proposals until late September. The Center’s Board of Trustees will hear recommendations from its Boy Scout Tract Task Force later in the fall and expects to make a recommendation to the board by year’s end.

How is the Schuylkill Center sharing this plan with the neighborhood?

In addition to a public meeting cosponsored by four groups– the Upper Roxborough Civic Association, the Residents of the Shawmont Valley Association, the Roxborough Manayunk Conservancy, and Friends of the Upper Roxborough Reservoir Preserve– the Center has been in close contact with city and state elected officials, neighbors on adjoining streets, its own members and friends, other nonprofits, and many others stakeholders in an effort to brief the community on this plan and respond to everyone’s concerns. Our RFP will also be placed on our website, as has this document of Frequently Asked Questions. We will of course update these documents as needed as we move through the process.

Once we have a proposal(s) to share, we will be reaching out to these same groups and individuals for continued discussion.

Questions and concerns should be addressed to boyscouttract@schuylkillcenter.org; we will strive to answer every email in a timely fashion.