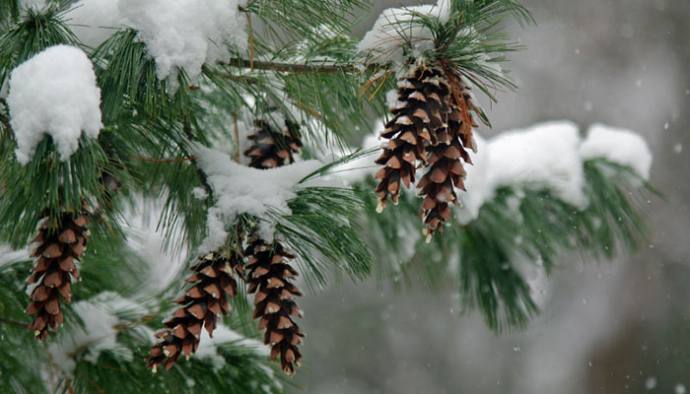 The white pine in winter, one of the few sources of green in our wintry world.

This deep in a surprisingly cold and snowy winter, you, like me, might be jonesing for some greenery, as winter’s bleakness can be a little depressing. I have just the antidote: get thee to the Pine Grove, an island of green in an ocean of winter’s browns and grays.

One of our visitors’ favorite sites on the Center’s 340 acres, the grove is oddly not a natural phenomenon at all, but instead an artificial plantation of white pines planted in the1970s for the Center to use– to my surprise when I came access this in some notes– to sell as pine wood. Happily, that never happened, and the trees have matured into a dense grove of sharp-needled evergreens beloved by not only our visitors, but by kids in our summer camp and preschool and after-school programs, all of whom revel in visiting the grove to build forts from the many fallen branches there– it looks like a small city built by elves.

While you are there, make sure to pay special attention to the tree, an extraordinary organism.  “There is no finer tree,” wrote Henry David Thoreau in his journal, and few trees have played a larger role in American culture than this, the tallest tree in our region. For one, first British and then American navies relied on white pines, the Brits picking out “mast pines” that were specially marked and reserved for the Crown to use in English ships. And how many of us grew up watching TV in a pine-paneled den (I did!)? The tree is so useful that only 1% of old growth pine forests remain in the eastern US– we logged out all the rest.

Today, pines of 100 feet in height are common, but back in the day, 200-foot-pines were more typical. In Cook State Forest in Pennsylvania’s Clarion County, there is a stand of uncut white pines, with one, named the “Longfellow Pine” and measuring almost 184 feet tall, regarded as the tallest white pine known today.

Like all pines, the white pine holds its needles in clusters, something spruces and firs do not do. Each pine has a characteristic number of needles, which in the white pine is five; this alone makes the tree easy to identify. A conifer, the tree produces male and female cones– you’ll see them everywhere in the grove– the female cones the familiar one. The smaller, almost inconspicuous male cones form in the spring, releasing billions of pollen grains into the air, as the tree is wind-pollinated. Yes, pine pollen likely makes you sneeze.

The long, conspicuous female cones produce seeds, which are craved by a large number of animals, including squirrels and many birds. The cones also produce sap, which gives the tree its scientific name Pinus strobus, as the specific name strobus is Latin for “tree that produces gum.”

While an evergreen, the tree’s needles live about 18 months. So every fall the white pine sheds its needles from two springs ago in a surprising orange shower.

A new recognition of the importance of pines has come as people rediscover the health benefits of trees and forests. In one extraordinary experiment, a Japanese scientist sprayed a small amount of pinene, the chemical that gives pines its characteristic scent, in a hospital’s neonatal ward, allowing newborns who have not ever been outside to smell its scent. Their blood pressures dropped as the babies “chilled out.” Turns out we are hardwired to be calmed by pine trees. When you smell that pine freshener in your Uber driver’s car, it’s also likely lowering your blood pressure, which is not a bad side effect.

When you visit Pine Grove, you’ll also notice two large piles of branches and trunks lying to the side. Pine Grove was whacked two Junes ago in that derecho that barreled through the region. Derecho, Spanish for straight, is a fast-moving linear storm system, this one trucking from like Reading to the Jersey shore while passing through Roxborough on the way. The straight-line winds took out too many of the pines. (Climate change is introducing us to new words, like derecho. Several have now plowed through our region in the last decade.)

We had just the year before planted about six smaller white pines to begin to fill the canopy gaps. But those were chewed on by pine borers, an unforgiving beetle that is concentrated in the grove, as the cluster of pines is an unnatural occurrence that the beetles are enjoying. If you look closely at many of the tree’s trunks, you will see small holes that look like someone drilled into the tree, these being the exit holes of the adult beetle, it’s larvae happily chewing through the wood. Only two of the six trees have survived– the beetles got the others. Then the wind-lopped trees fell on them, and we carefully pulled the ruks and branches off.

In our Year of Restoration, our environmental art program will make this material available to local artists to turn into art, a clever way to remove these fallen pine parts from the grove– stay tuned for this.

So if you too are looking to sit in a quiet relaxing place surrounded by the calming color of green, come visit Pine Grove, and decide for yourself if Thoreau was correct.

This week in climate. Two Sundays ago, winter storm Izzy dumped large amounts of snow across a huge swath of the South, bringing ice and high winds to the region while knocking out power for almost 300,000 people. But it fueled tornadoes too, one with winds approaching 118 mph that destroyed 30 mobile homes. Remember, tornadoes need large inputs of energy to form, something that a winter storm should not have. But in this climate-changed world, tornadoes can even strike in January. The PHS’s Mindy Maslin, founder of Tree Tenders, is being honored for helping plant 20,000 trees across the region.

Philadelphia has a bold plan for reforesting the city, making sure 30% of our city is blanketed under a canopy of trees, which will go a long way to mitigating heat waves and cooling our city’s rapidly changing climate. It’s also an environmental justice plan, as– no surprise– economically challenged portions of the city have fewer trees than more advantaged neighborhoods.

Mindy Maslin supports this ambitious goal. As the founder and director of Tree Tenders, an important program of the Pennsylvania Horticultural Society (PHS), Mindy has been responsible for planting some 20,000 trees across the region while training 5,600 tree care volunteers since forming the program in 1991. Can you imagine that: 20,000 trees?

To honor this extraordinary work, we are thrilled to present our 16th annual Henry Meigs Environmental Leadership Award to Mindy, as she not only believes planting trees is “a powerful way to enhance the health, resilience, and quality of our neighborhoods,” but has inspired thousands of citizens to make a difference in their community.

The Germantown resident is being given the award, our highest honor, in a virtual ceremony set for Thursday, November 18 at 7:00 p.m. Joining Mindy for a conversation on “The Urban Forest” are Tree Tenders and community leaders Sharrieff Ali and Gabriella Paez, along with Jack Braunstein, manager of the Tree Philly program, the group charged with implementing this important goal. The event is free; one can register on our website.

Tree Tenders is one of the oldest volunteer urban tree stewardship programs in the country, and has inspired similar programs throughout Pennsylvania and across the U.S. Locally, Tree Tenders graduates come from at least 100 active volunteer groups in the city and surrounding counties. Since this work is done by volunteers, the city has saved hundreds of thousands of dollars by not having to hire professional arborists to do the planting or the initial care.

Mindy sees the social benefits of trees and is committed to addressing the inequities in tree canopies. Her PHS tree team has identified an uneven distribution of tree canopy that corresponds with high-density, low-income, and even high-crime neighborhoods. This latter point is important: there is less crime and, this is extraordinary, a lower murder rate in neighborhoods shaded by trees.

Mindy agrees that “all neighborhoods deserve to benefit from trees, for heat island abatement, air quality improvement, stormwater sequestering, and the softer gifts of mood enhancement and community building.” In response, Tree Tenders has a tool for prioritizing planting in low-canopy neighborhoods. In fact, studies show that people view urban residential spaces with trees as more attractive, safer and more appealing. “If you plant trees,” Mindy says, “it encourages people to go outside, meet their neighbors and build relationships; in turn, it fosters community pride which ultimately makes neighborhoods safer.”

“You need to convince people who might be reluctant to plant a tree on their property why taking this action will improve their lives,” she says. And that happens at the neighborhood level where locals become advocates in their own community. Once you plant a tree, it still needs care to grow—a critical part to a tree’s survival. That’s where the stewardship piece comes in. The Tree Tenders program provides a framework to check on the trees and neighbors to make sure that the proper care is given.

PHS’s Chief of Healthy Neighborhoods Julianne Schrader-Ortega notes, “Mindy is an integral part of the vitality of PHS’s mission to use horticulture in advancing the health and well-being of citizens in our local region and we’re pleased that Mindy is receiving the Meigs award as public recognition of the large impact she has had on the environment and on people’s lives.”

Mindy is honored to be receiving this from “an institution of the Schuylkill Center’s caliber. It is a huge professional accomplishment. For decades, Tree Tenders and the Center have created joint programs that have served thousands of people in the region; our collaborations continue to be a highlight in my career. This award from such a valued partner is truly extraordinary.”

In turn, I’m so happy my Center is honoring her, as few people have planted more trees in the region than she has, and tree planting is such a powerful act, for all the reasons noted above.

The award celebrates area leaders who symbolize the spirit of integrity and vision of Henry Meigs, one of our founders, who served on our board for 40 years until passing away in 2005. His family established the award shortly thereafter, and past honorees include former governor Ed Rendell for his work on Growing Greener, environmental artist Stacy Levy, whose extraordinary art graces locations across the region, and Jerome Shabazz, founder of the Overbrook Environmental Education Center in West Philadelphia.

Hope you’ll Zoom in with us.

Be among the first to preview the 2020 Spring Native Plant Sale at this special evening just for members. Enjoy a botanical happy hour, chat with staff, ask your gardening and native plant questions, and celebrate the coming of spring. See our catalog here.

Not a member? Join today!

During this guided hike, we’ll see some of the biggest trees in our forest—some over 13’ around! Learn how to identify these trees based on their winter characteristics, such as shape and bark pattern. As we walk past old fields and ruins of 19th century homesteads, you’ll hear about the history of the land and how human use has influenced our forest. If there is snow cover on the ground, wear warm boots or snowshoes. A limited number of snowshoes are available for members to borrow. Registration is appreciated.

Not a member? Join today!