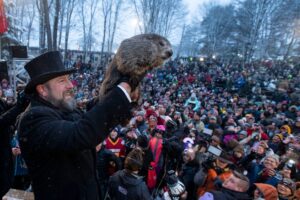 Punxsutawney Phil meets his adoring masses in 2020, when he called an early spring. What will he say this year?

Early Wednesday morning, way out there in the small town of Punxsutawney, a portly aging man in top hat and tails will unceremoniously yank a grumpy groundhog from his winter den and present it to a roaring crowd numbering in the tens of thousands. The man then will whisper to the groundhog in a secret, shared language, what he calls “Groundhogese”…

And, for the 136th year since 1886, Punxsutawney Phil, the most famous rodent besides a mouse named Mickey, will have predicted the weather. Happy Groundhog Day. While I write this on Friday and don’t yet know what he said, I’m gonna go out on a limb and say Phil tells the guy he sees his shadow (even if it is overcast) and we get six more weeks of winter. In this snowy, icy, bitter cold winter, he’d completely lose his credibility otherwise (like the groundhog has any, but you know…).

Though Phil’s batting average isn’t high—the National Climatic Data Center says his accuracy is only 39%, worse than a coin flip—his forecast of six more weeks of winter is the safe one. In 136 tries, that’s been his call more than 100 times.

As a naturalist, however, I love a holiday named for an animal, and I’m tickled that the national media just might have made room among the top stories, like Russia on the cusp of invading the Ukraine and President Biden on the cusp of nominating a Black woman for the Supreme Court.

And I love that it’s based in some natural history.  Groundhogs—also called woodchucks—are in fact hibernators, sleeping the entire winter away in underground burrows, their heart rate plummeting from summer’s 80 beats per minute to winter’s five. Five beats per minute! In February, males arouse themselves from this slumber to scout their territory, searching for the dens of potential mates. Finished scouting, they go back to sleep for another month or so.

Pennsylvania Dutch farmers settling in the New World brought their German tradition of seeking out a hibernating animal—for them it was badgers, while Brits used hedgehogs—on February 2 for weather prognostications.  Coming here and seeing groundhogs roaming in February likely began the tradition of Groundhog Day.

But the choice of February 2 is no accident. Those same German settlers also commemorated the Christian Candlemas, the day when clergy blessed and distributed candles to combat the dark of winter, and lighted candles were placed in windows. Candlemas comes at the exact midpoint between winter solstice and spring equinox, and superstition held that if the weather was fair this day, the second half of winter would be cold and stormy. “If Candlemas be fair and bright,” said the superstition, “winter has another flight. If Candlemas brings clouds and rain, winter will not come again.”

Candlemas itself has an origin in the pagan celebration of Imbolc, one of four cross-quarter days, the halfway marks of seasons. Echoes of ancient cross-quarter holidays have stayed with us through the ages in May Day, Halloween, and Groundhog Day.

Today, we are halfway through winter, as farmers used to remind themselves by repeating the adage, “Groundhog Day, half your hay.” Pace yourself; make sure you’ve got enough for winter’s second half.

Seems there was a long-ago tug of war over which calendar would mark the seasons, one where cross-quarter days begin them, the other where solstices and equinoxes do. Midsummer’s Eve, another pre-Christian holiday captured so wonderfully by Shakespeare, occurs on the summer solstice, now the beginning of summer.  But way back when, the solstice was the midway point of the season.

Portions of that ancient calendar have stayed with us, embedded in our cultural DNA. When that top-hatted gentleman pulled Phil out of his burrow up there on Gobbler’s Knob, he reminded us of olden days when a completely different calendar ruled– and Wednesday was suddenly Imbolc, the very first day of Spring.

No matter what Phil called this week, let’s be honest: he’s got better chances of getting his prediction right than the Flyers have of winning the Stanley Cup. Paws down, sadly.

P.S. The name Punxsutawney is so evocative. I knew it had to be a Native American name, but only just last week checked into it. Turns out it’s a Lenape phrase meaning “town of mosquitoes.” Ssh, don’t tell the Chamber of Commerce– not quite the image they’d want to invoke.