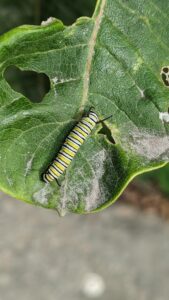 Monarch caterpillar on a milkweed plant outside our front door

When one worries about nature, the world is so much like a Springsteen song, one step up and two steps back.

One step up: the Schuylkill Center’s staff have seen multiple monarch butterflies and their caterpillars in and around the center recently, many of them right outside the Visitor Center’s front door. This beats several recent years when there were few– if any– sightings of the Halloween-colored insect. For butterfly lovers like me, it’s been a great week for monarchs. In fact, only hours before I wrote this, I spotted a bedraggled adult monarch butterfly (her wings were really faded and beaten up) nectaring on Joe-pye-weed in our front garden while scoping out places to lay her eggs.

And two steps back: just last week, the International Union for the Conservation of Nature formally added the famously migrating butterfly to its “red list” of threatened species and officially categorized it “endangered,” only two steps away from extinction. The group estimates that North American monarch populations have declined between 22% and 72% over 10 years, depending on the measurement method.

“What we’re worried about is the rate of decline,” said Nick Haddad, a conservation biologist at Michigan State University. “It’s very easy to imagine how very quickly this butterfly could become even more imperiled.” He estimates that monarch populations in the eastern US have declined between 85% and 95% since the 90s.

Scientists typically speak in more measured language about their concerns. Not anymore. “It’s just a devastating decline,” said Stuart Pimm, an ecologist at Duke University. “This is one of the most recognizable butterflies in the world.”

The monarch butterfly defies logic, for embedded in a small collection of nerve cells generously called a brain is a GPS directing the insect to fly from, say, here in Roxborough all the way to a mountain valley near Mexico City, where it joins every other monarch from east of the Rockies (western monarchs head to the Pacific coast). It’s the longest insect migration known to humanity.

Once in Mexico, they gather in large groups to coat fir trees with millions of their bodies, a remarkable sight visited by thousands of eco-tourists annually.  The butterflies wait out the long winter, living five months—Methuselah territory for an insect.

In early spring, they begin heading north, make it into Texas to lay their eggs—and die. It takes another generation or two for monarchs to make it back to Pennsylvania, not until early summer. Then this fall, monarchs will fly more than a thousand miles to a place they have never been, joining millions of their friends who have the same GPS coordinates. “It’s a true spectacle and incites such awe,” said Anna Walker, a conservation biologist at New Mexico BioPark Society, who was involved in determining the new listing. 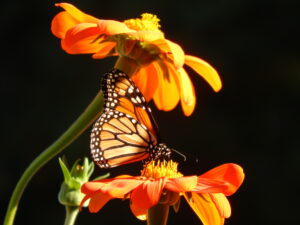 But here’s the scary thing. Last year, North America’s monarchs were overwintering on only 7 acres of Mexican fir trees. Seven. One ice storm, and our monarchs are… gone. Crazily, that number is UP from the previous year of even fewer acreage.

Monarchs have been crashing for a number of reasons, one huge one being that herbicided corn and soy fields across the Midwest have become milkweed deserts, as modern agriculture has removed the host plant required for caterpillars. No milkweed, no caterpillars. To restore monarchs and other pollinators, the nonprofit Monarch Watch has initiated a nationwide landscape restoration program, “Bring Back the Monarchs,” that hopes to restore 20 milkweed species to their native ranges throughout the United States and to encourage the planting of nectar-producing native flowers that support adult monarchs and other pollinators.

This is an outgrowth of the Monarch Waystation Program started by Monarch Watch in 2005. “While these sites, mostly habitats created in home gardens, schoolyards, parks, and commercial landscapes, contribute to monarch conservation, it is clear that to save the monarch migration we need to do more,” Chip Taylor, Monarch Watch’s founder and director, said. “We need to think on a bigger scale and we need to think ahead, to anticipate how things are going to change as a result of population growth, development, changes in agriculture, and most of all, changes in the climate.”

Taylor wants a comprehensive plan on how to manage the fragmented edges and marginal areas created by development and agriculture, since it is these edges that support monarchs, many of our pollinators, and the many forms of wildlife that are sustained by the seeds, fruits, nuts, berries, and foliage that result from pollination. “In effect,” Taylor argues, “we need a new conservation ethic, one dealing with edges and marginal areas that addresses the changes of the recent past and anticipates those of the future.”

For now, I’m appreciating the new attention given to this amazing butterfly by its listing, and reveling in the many monarchs we are seeing here at the Schuylkill Center these days. Come see them yourself.

Watch some of our recent conversations about monarchs

Mike Weilbacher, the Center’s executive director, has been writing and teaching about monarchs while planting milkweed for 30 years now.