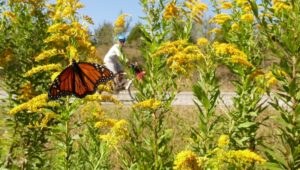 Author, educator, and “butterbiker” Sara Dykman observes a monarch sipping nectar on goldenrod during her epic 10,201-mile bike trip as she followed the butterfly’s migration.

Sara Dykman did something that no other human on this planet has ever done, or even thought to do. In 2017, she followed the entire migration route of monarch butterflies from their overwintering spot in Mexican mountains, north to Canada as far as monarchs go, and back to Mexico. Over a full year, she followed the butterflies.

“Butterbiking,” she dubbed it, and rest assured no other person ever thought to accomplish such a remarkable feat. Happily, she turned her adventures into a book, “Bicycling with Butterflies” to share her story with us. On Thursday, April 14, at 7:00 p.m., Sara virtually visits the Center as part of its spring Thursday Night Live series. “Bicycling with Butterflies” is a free lecture; register for the event to receive the Zoom link.

In an email conversation last week, I asked her why she did this unique feat– and how she keeps her answer to the “why” question fresh, as I am only the latest in a long line of thousands of people who have asked her this.

“I started biking with butterflies,” she told me, “to have an adventure and learn about the monarchs, but the more I learned, the more I realized that the monarchs needed me to be their voice. My tour became a publicity stunt to catch people’s attention and help them learn that the monarch’s migration could disappear if we don’t all plant habitat, especially milkweed, which is the only food source of the monarch caterpillar. And yes,” she continued, “it can get old answering the same questions, but that’s kinda the point. I just remember that every question can lead to another person noticing monarchs and possibly creating habitat to help save them.”

In her book, she recounts another question she was asked repeatedly, starting off in Mexico, “Estas solas?” people would ask. “Are you alone?” She told me that “I’ve turned this question into a joke. I always answer it by saying I wasn’t alone. I was with the butterflies.”

At the moment, there are no monarchs in Philadelphia– yet. As Sara will recount, monarchs overwintering in Mexico fly into Texas, exhausted, and lay eggs on milkweed plants emerging there. Those next-generation monarchs push further north, so it may be several generations before we see them in late spring, early summer. But monarch populations have been plummeting in recent decades, threatening this unique migration phenomenon.

“Monarchs have seen a downward decline,” she said, “mostly because of habitat loss and climate change.” Midwestern farm fields are routinely sprayed by herbicides that remove “weeds” like milkweed, and as milkweed populations drop, monarchs have been declining too. The butterfly is hit at the other end of its migration, too, as logging in Mexico’s mountains compromises the fir forest where they spend the winter. Of course, climate change upends their life cycle across all of North America.

Climate change worries her “with every ounce of my being. The earth has found this incredible balance. The monarchs arrive (in Texas) just as milkweeds are emerging, that alone feels impossibly perfect. Then you think about the wind, rain, weather, every system really. They are all connected to give monarchs and their neighbors what they need. As the climate changes, this balance will be destroyed.”

As she met people on her butterbike five years ago, she was also routinely asked whether or not monarchs needed to be saved. I wondered if people were still asking that or has the needle moved on their story? “Sure, I think the needle is moving,” she responded. “People are starting to share their yards with their more-than-human neighbors, and more people than ever know about monarchs and their plight. But we need examples of new ways of living on every street in every town, because until we learn to share the earth the monarchs won’t be safe. On my tour, it was when I stayed with people that were planting gardens and sharing that I found the most hope. I think the monarchs are amazing because they give us a first step to helping the planet. All you have to do is grow a native garden.”

As we ended our exchange, she offered, “Monarchs are so generous. They will visit even a small garden (even a potted plant) if you give them the opportunity. They will help you be part of an adventure. They can be your teachers too, because they ask you to slow down and notice the world around you. And that world is really, extraordinarily wonderful.”

Join Sara on this adventure Thursday night at 7:00 p.m. and meet the world’s one and only butterbiker.

This week in climate. “Why are we talking about anything but climate change?” wonders Mary McNamara, culture columnist and critic with the Los Angeles Times, in a scathing op-ed piece. “Our ability to lower atmospheric temperature has thus far been flung to the four (now regularly hurricane-level) winds, because a few of us are making too much money from fossil fuels and the rest of us are busy weighing in on things like ‘cancel culture’ or what the film academy should do with Will Smith to notice that we are boiling ourselves to death.” She opined, “The first thing we need to do is stop using the term ‘climate change.’” It’s a climate crisis, she says, and of course she is dead-on.