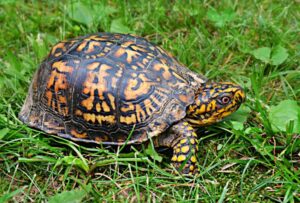 Why did the box turtle cross the road? Likely to lay her eggs, Bernard “Billy” Brown says.

While Philadelphia is a big, old, well-developed urban area, one of its many surprises is the abundant wildlife found not just in natural places like the Wissahickon, the Schuylkill Center, the John Heinz refuge, and more, but tucked into the many nooks and crannies across the city. Especially surprising might be the large number of reptiles and amphibians living alongside us as our natural neighbors.

One of our city’s most engaging naturalists, Bernard “Billy” Brown, will introduce you to many of our city’s creepy crawlies. On Thursday, April 7 at 7:00 p.m., Billy presents “Snakes, Turtles, and Toads, Oh My! Philadelphia’s Reptiles and Amphibians,” a free illustrated lecture that is part of our Thursday Night Live series.

“Once I had home to classically wild spaces to look for these animals,” he told me, “and now I look wherever I happen to be.” He recounts finding red-backed salamanders under stones near the Art Museum and surprisingly common brown snakes in vacant lots across the city.

Author of the monthly “Urban Naturalist” column in Grid magazine and co-host of the “Urban Wildlife” podcast, Billy has been “herping,” as friends of reptiles and amphibians call it, since he was a child growing up in the Columbus, Ohio area. “I’m hoping to give people some comfort and familiarity with creepy crawlies,” he said, “and hope that fosters a deeper connection that leads to conservation.”

Familiarity with creatures like the black rat snake, “one of my favorites,” he said. “It’s one of the longest snakes in North America, is nice looking, and has a great vibe– it can be quite mellow while handling it. It’s a semi-arboreal snake; unlike other snakes it doesn’t panic when it’s picked up off the ground.

“If it weren’t for cars,” he continued, “we’d have black rat snakes everywhere. Since they eat warm-blooded prey like house sparrows and mice, there’s plenty of prey for them in the city. But they can’t cross roads well, so a five-foot black rat snake crossing Ridge Avenue is not going to do well.” And if a car doesn’t get it, some non-snake-loving person might, as people assume every snake is poisonous or harmful, and sadly kill them.

Speaking of snakes, he’ll introduce you to a common snake here at the Center, the northern water snake, one that is the happy beneficiary of a snake-tuary, a first-of-its-kind sanctuary for snakes near the dam in the Wissahickon just below Valley Green. Water snakes bask on the site’s warm stone walls on sunny days, and are passed by many people, some of them on their way to Devil’s Pool, the illegal and problematic swimming hole.

“It’s a tricky spot,” he said, because of the high traffic. Craig Johnson, the owner of Glen Fern, the historic house alongside the dam, noticed people– “often young men,” Billy noted– “not being nice to the snakes,” harming, even killing the non-venomous creatures as they basked. Craig– who has been written about both in this column and in Billy’s Grid column– worked with Friends of the Wissahickon “to put up a fence and signage about the snakes. He took a problem and turned it into a great educational opportunity,” perhaps America’s first sanctuary for a reptile.

He’ll also talk about Roxborough’s famous American toads, and he wrote about Toad Detour for Grid magazine a few years back. Toads awaken from their winter’s hibernation in our large forest, then cross Port Royal Avenue on rainy nights to climb into the old reservoir to mate. Our volunteers close the road on rainy nights to allow toads to cross without getting squashed.

“Mid-April is solid toad time,” he said, “right now”– in late March when we talked– “it’s mostly males crossing. For explosive breeding amphibians like toads, males tend to show up first, get set up, and the females tend to come later to listen for the best singers.” April evenings are a great time to walk the reservoir park’s circular trail to listen to toad song– such a treat, as the male’s loud trilling is enchanting.

And if you find a box turtle crossing a road? “It’s likely a female looking for a place to lay eggs.” He extorts everyone to not move a box turtle from its locale– or try to adopt it as a pet. “They grew up in a place,” he explained, “and that’s the place they know– where to hide, where to find food, where to hibernate.” Many people, coming across a turtle, can’t believe that it can survive in a woodlot or even a small suburban forest, and “pick it up and put it in a patch of woods like five miles away. So now it doesn’t know where to hide, find food, or hibernate, and it will start looking to go back home.” And will tirelessly, usually unsuccessfully, try to get back to what it knows.

“So if you find a box turtle trying to cross a road, simply help it across– that’s it.”

His coming Grid column in May focuses on the plight of the red knot, a migratory shorebird featured in last week’s Thursday Night Live. This week, allow Billy to immerse you in the wonderful herping world of snakes, turtles, and toads, oh my! To get the Zoom link, simply visit our website to register for the free event.

This week in climate.  Among its many impacts, the Russian invasion into Ukraine has halted important climate research. Arctic permafrost holds TWICE as much carbon as that stored in the atmosphere, and the Arctic has been warming four times faster than the rest of the world. As Russia owns fully one-quarter of the Arctic’s shoreline, many multinational research projects into permafrost have been canceled, just when we need this critical information.