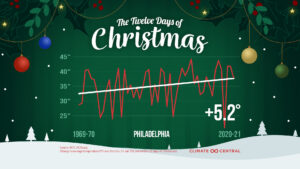 Since 1970, temperatures in Philadelphia during The Twelve Days of Christmas (December 25 to January 5) increased over 5 degrees.

It’s been a December to remember on the weather front.

Two weeks ago, a series of high-intensity tornadoes tore a 200-mile path from Arkansas and Missouri into Illinois and Kentucky, killing more than 85 people (as of this writing), with many more still missing. But then last week another– very powerful and equally unusual– system swept through the Great Plains and Midwest under weirdly warmed skies, spawning hurricane-level winds in Nebraska, Iowa, and Minnesota, killing another handful of people. And hundreds of thousands have been without power after these two systems.

That tornado system blew through Roxborough over that weekend, one gust knocking over a dead ash tree that took out the our power lines, leading to us having to scramble on Monday to restore everything. Maybe you’ve noticed the weirdly warm winter as well.

Storms like this are fueled by a diet of energy, and high-heat storms should not exist in December. Welcome to winter in the New Abnormal, as we have been calling it here at the Center.

It was 70 degrees in Wisconsin that Wednesday evening. In its reporting on the event, the Philadelphia Inquirer quoted Weather Company historian Chris Burt, who wrote on Facebook comparing that day’s temperatures to a “warm July evening. I can say with some confidence that this event (the heat and tornadoes) is among the most (if not THE most) anomalous weather event ever on record for the Upper Midwest.”

Across the lower 48 states, it has already been a far warmer December than normal, with 3,069 daily record high temperatures set across the country, and only 14 record lows. Climate Central says last week’s “extreme heat could push December toward the warmest on record, following the warmest summer, 3rd warmest autumn, and 7th warmest November on record for the U.S.”

Thus far, 2021 is only the fifth warmest on record, but the five warmest years are ALL from 2015 or later– statistically, if the climate was not changing, the top five would be a random assortment of years from a variety of decades. That five of the last six years are the warmest ever recorded tells you a whole lot. But we’ll see where this hot hot hot December places the year within this regrettable pantheon.

And as we noted two weeks ago, a white Christmas is becoming increasingly rare. As the graphic nearby illustrates, the 12 days of Christmas have warmed by more than five degrees since 1970, says Climate Central, making the chances for snowfall increasingly less. (I’m writing this before Christmas, and you’re reading it afterwards, so we’ll see if the weather gods make me eat these words!)

We’re also entering a world where high-intensity storm events are increasingly common, so climate change makes the news on a weekly basis, with tornadoes here, hurricanes and typhoons there, flooding here like we saw with Ida, droughts there, heat waves here, wildfires there.

In 2021, we learned that the climate can kill us. As we leave 2021 behind us, the Earth is offering a very loud, very palpable message.