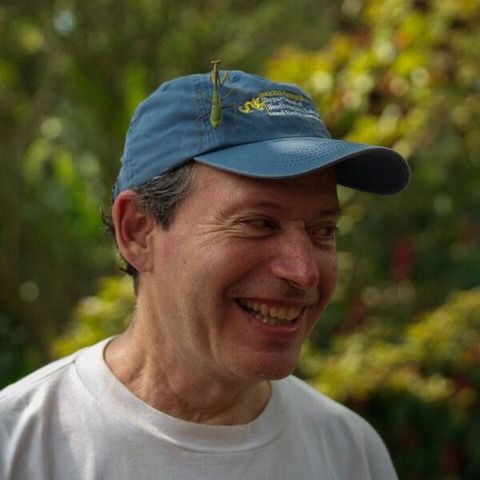 Naturalist and author Craig Newberger with a hitchhiking praying mantis.

It’s the first day of June, with the spring season in full flower– pun totally intended. Want to know what you might do to more fully experience nature now? Simple. Grab a copy of “Spring Processional,” a hot-off-the-press book by local naturalist Craig Newberger, where you’d learn now is the time to see horseshoe crabs mating on the Delaware Bay and the first meadow wildflowers blooming.

He’s recently retired as the Lower School science coordinator for the Germantown Academy in Fort Washington, a position he held for more than 30 years. A Cheltenham native and longtime Lansdale resident, Craig has just added book author to his lengthy resume, as “Spring Processional: Encounters with a Waking World” is the first of four books on the nature of the seasons published by Grackle Publishing in Ambler.

Comprised of 20 personal essays, each focusing on a small slice of the season, the book fittingly begins with the emergence of skunk cabbage– the first wildflower of spring — and continues through spring’s elegant march: frogs singing for mates, the woodcock’s extraordinary mating flight, those delightfully ephemeral forest wildflowers, and so much more. And many of the essays are surprises; dandelions, snapping turtles, opossums, even skunks are not obvious subjects for a springtime essay. But there’s a method to Craig’s madness.

“All of the chapters come from a personal experience,” he told me via phone last week, “from over 40 years of exploring nature outside and a desire to share my stories. Many people have said, ‘you know so much, you should share it all!’” So he did.

And many of the stories involve his students, as they were fortunate enough to have a science teacher who took them outdoors, into nature, to see things like Jack-in-the-pulpit themselves. About that flower, he writes, “Everyone stops, squats, and jostles to get a closer look. Immediately the questions fly as we engage in a wide-ranging conversation about one of the most captivating wildflowers of spring.” Nowadays, this is almost a radical idea, of teaching science outside? Sadly, too few science teachers do. Craig’s GA kids were lucky.

The book’s last essay on the spadefoot toad is “a great example of how surprising and unpredictable nature can be,” he told me. Early in his career when he was living on Cape Cod, he ventured outside around midnight in a torrential downpour to discover a “congress,” the official word, of eastern spadefoot toads, a threatened species that spends much of its life underground, amazingly. In his words, “It is the siren call of a dark and stormy night that brings them to the surface to breed. They appear for a matter of hours and then disappear for days, weeks, or perhaps years.” Two days later, the area was teeming with toad tadpoles that would become tiny toadlets in only two weeks, only to leave the water and disappear underground again.

The book is divided into three sections. The first, Emergence, pictures a world reawakening from its winter slumber with the very first signs of the new spring season. The second, Renewal, follows a series of events guaranteed to happen every year: the emergence of spring wildflowers, for example, coinciding with the return of migrating warblers.

The last of three sections, Resilience, includes essays on creatures that have survived eons, like the opossum, horseshoe crab, and “resolute” snapping turtle, all of whom survived the meteorite that smashed into planet 66 million years ago and caused the extinction of two-thirds of the earth’s living things. But it also includes the tenacious dandelion, able to grow where seemingly few other plants can. “Throughout the ages,” he writes, “dandelions have appeared in folklore. They are considered omens of good luck, and even symbols of fertility.”

Each of the essays include wonderful snippets of information even old-school naturalists like me find new and refreshing. “I think it’s remarkable,” he told me, “that the temperature inside the skunk cabbage’s hood can be 50 degrees warmer than the air outside.” Each chapter contains a similar surprise: newborn opossum babies are the size of bumblebees; a water strider’s speed is comparable to me swimming 400 miles per hour (!); a horseshoe crab, “like no other creature, has mouthparts attached to its legs, so that it can only eat by walking.”

Craig’s lively text is enhanced by Sherrie York’s color illustrations and Steve Morello’s photography, and Haddonfield science teacher Ron Smith added an appendix on citizen science, which Craig felt was an important addition. “After you read these essays, you might want to help preserve these creatures. Citizen science is one way to do this.”

One small personal note: back in the 1980s, when I worked at the Schuylkill Center for only a year, Trudy Phillips was my colleague in the education department here, and a joy to teach alongside. She was dating Craig during our time together, and they later married. So I’ve known Trudy and Craig for almost 40 years now, and it is a pleasure and delight to read Craig’s book and report on it to you.

“I hope to encourage people to go outside and have their own encounters,” he told me. Get your copy now while we’re still in the midst of spring’s processional and begin your adventures.