Wood Thrush: The Pavarotti of our Forests - Schuylkill Center for Environmental Education 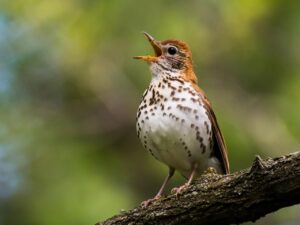 When I got out of my car at the Center last Thursday morning, I was immediately greeted by one of the happiest sounds of the forest: the melodic church-organ voice of the wood thrush. A very close cousin of the uber-common robin, the wood thrush is one of the most important birds you should introduce yourself to as quickly as possible.

And a simple walk on our trails or along the Wissahickon should help you accomplish that.

A migrant, the wood thrush has only recently returned from its winter haunts in Central and South America. So its call is one of the keystones in my springtime arch– as is the first skunk cabbage, the first butterfly, the first warbler, the first turtle along our pond’s ledge. While last week’s call was not the first of the year– that came in April– it was a happy reminder that some parts of the world still work.

The call is throaty and lush, a “haunting ee-oh-lay,” says on one website, with a bit of vibrato. It’s widely considered the preeminent songster of a Pennsylvania forest, our Adele, our Pavarotti. No less an observer than transcendentalist Henry David Thoreau agreed. “The thrush alone declares the immortal wealth and vigor that is in the forest,” he wrote. “Whenever a man hears it, he is young, and Nature is in her spring. It is a new world and a free country, and the gates of heaven are not shut against him.”

Doesn’t that alone make you want to go hear one? “Ethereal” is one descriptor you’ll encounter when reading about thrush song, as it uncannily can whistle two notes simultaneously, harmonizing with itself to produce the ringing that is so entrancing. It sings at both sunrise and sunset, making it one of the very first– and very last– birds you will hear that day.

It’s male that sings, often on an exposed perch in a tree, and the song carries surprisingly far in a dense forest. Like most birdsong, this accomplishes two tasks simultaneously. For one, it signals to other males to stay away, the male wielding his song to establish a territory of a few acres– so the male singing above me likely has his eyes set on a nest site not far from our Visitor Center.

But it also tells female thrushes he is in vibrant health and has a great nest site picked out. Within days of his territorial announcement, a female initiates their pairing, enticing him to chase her in silent circular flights only a few feet above the ground.

The bird itself is strikingly handsome. About the same size as its robin cousin, it sports a reddish-brown coat on its back, but wears a bright-white vest speckled with large black dots– the contrasts are beautiful. Many websites describe it as being “potbellied,” which is cute, and this feature helps distinguish it from its close relatives veery and hermit thrush, none of whom have dots (or songs) quite as striking as the wood thrush.

Wood thrushes are omnivores, feeding mostly on leaf-litter invertebrates and fruits from shrubs. Their summer diet includes adult beetles and flies, caterpillars, spiders, millipedes, ants, and more, and snails and salamanders are occasional prey as well. These are also the foods parent thrushes stuff into the gaping maws of their nestlings.

By the late summer and early fall, however, the thrush shifts its diet to fruits– something robin do too. They especially crave fatty fruits that help them bulk up (and get even more potbellied) for their exhausting southern migration. So in this season, they are seeking out the fruits of woodland shrubs, vines, and wildflowers like spicebush, fox grape, blueberry, holly, elderberry, jack-in-the-pulpit, Virginia creeper, pokeweed, dogwood, black cherry, and black gum. Poison ivy, bless its heart, produces splendid fall fruits that are avian magnets.

Happily, our forest is loaded with these fruits, so wood thrushes are common here.

A creature of the interior forest and an important indicator of forest health, the thrush has become a symbol of the vanishing American songbird; one study estimated that its population has declined 62% since 1966 in eastern North America. Forest fragmentation is often cited as a chief reason for its decline, as it requires more than small suburban woodlots, and fragmented forests offer fewer places to escape predators. The brown-headed cowbird, a social parasite that lays its eggs in other birds’ nests, will stay out of deep forest interiors, but can easily find thrushes in smaller forests– and lay its eggs in the nest, its larger nestling outcompeting smaller baby thrushes for parental attention.

It’s also a victim of being migratory. While North American forests are fragmenting, Central and South American forests– its winter home– are disappearing, so, like many birds, the wood thrush is being hit at both ends of its migration.

But the first time I hear one at the Center in the spring, I stop and savor the sound: the gates of heaven have just opened.