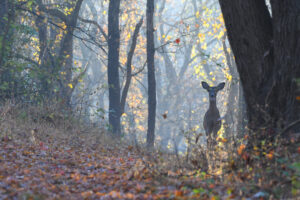 White-tailed deer are just one of many issues compromising the future of our forests.

Walk into the Center’s forest– or any forest in the region– and you’ll notice a habitat filled with invasive plants. The bright yellow flowers of lesser celandine, while beautiful, carpet the forest floor right now. Devil’s walking stick, every inch of it converted by thorns, are shooting up in massive clusters. Garlic mustard is in full flower, its leaves being munched on by the caterpillars of cabbage white butterflies, an invasive non-native butterfly– and often the first butterfly we see in the spring.

And that’s just the beginning, our forests overflowing with a veritable United Nations of Norway maple, English ivy, Japanese honeysuckle, and Oriental bittersweet, not to mention tree of heaven, cork tree, Norway spruce, knotweed, purple loosestrife, and on and on. Sadly, these invasives crowd out the native plants, contributing to the reduction in the biological diversity of the plants and animals of Pennsylvania forests.

In response, numerous environmental groups across the entire region, state, and country are working so hard to restore our forests, meadows and wetlands, engaging friends and volunteers in pulling out the invasives and replacing them with natives. Last week, we celebrated Earth Day by planting a number of native trees in an area we have christened the Earth Day Forest– and every year at Earth Day our stewardship efforts are focused here, planting native trees back in our landscape on this special day.

Worse, climate change and very hungry deer, not to mention new threats like lantern flies, conspire to undo all this hard, necessary work. The very trees we plant may get damaged by deer, and in a few decades the climate may warm so much that southeastern Pennsylvania might no longer be suitable for some of them.

So what do we do? What’s the path forward– if any? Join some of the region’s top restoration specialists in a lively conversation about the critical issue of restoring native habitats. The last in a spring series of Thursday Night Live virtual conversations, the “Restoration Roundtable: A Town Meeting” is set for Thursday, April 28 at 7:00 p.m. The free event is held over Zoom; register and receive the link.

The event’s guests include Gary Gimbert, Senior Director of Land Stewardship and Restoration Coordinator of Natural Lands, one of the region’s largest non-profit land trusts that manages thousands of acres of preserves across the area, Steve Goin, the Schuylkill Center’s Director of Land and Facilities and a certified arborist, Steve Jones, a board member with Wissahickon Restoration Volunteers, and Rebecca Kagle, managing principal with Larry Weaner Landscape Associates. Each of these people will share their restoration experiences– and most importantly, answer your questions about this important topic.

What’s the best native tree to plant in my yard? What do we do about deer over-browsing our forests? What will the impact of climate change be on our forests? How can more of us help? And the most interesting question perhaps of all: can any of us restore any forest to anything it might have ever looked like in its history? Our four guests will answer all of your questions about restoring native habitats while offering their organizations’ unique perspectives.

For the Center, this question is central to our land stewardship work. For the last 20 years, we have been actively engaged in a wide variety of restoration projects across our 340-acre forest, like putting up a deer fence to exclude those hungry animals from a 20-acre Wildflower Loop, giving spring wildflowers there a chance to flourish. We’ve planted several thousand trees, shrubs, and wildflowers throughout our forest in this time, desperately hoping a large number of them stick. Trouble is, we never know how many have– and we have to monitor them continuously.

So we have backed away from using the word “restoration” in our projects, and instead describe our work appropriately as “stewardship.”

We are actively working– every day– to improve the land while acknowledging we’re not sure we can restore it to anything it ever looked like before.

After all, we’ll simply never rid our forest of every invasive plant that is not native to this corner of the planet.

At the same time, we’re also not willing to concede defeat, not willing to raise the white flag, not willing to pack our bags and go home. We are caretakers of a massive sweep of forest, and will doggedly strive to improve it while openly acknowledging it is an uphill slog. We’re rolling that boulder up a very large hill, fully aware it might crash down on us anytime.

So we soldier on. And will wrestle with our work openly on Thursday evening at our Restoration Roundtable, and invite you to wrestle with us. See you there. 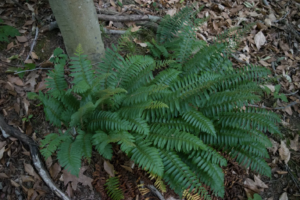 Christmas fern, one of the few plants still green in a January forest.

The New Year is a great time to go for a walk in a natural area near you– the Wissahickon, Andorra Meadow, the Schuylkill Center, anywhere. The walk likely helps you meet one of your resolutions– yes, get those 10,000 steps!– while being outside allows you to sidestep that accursed virus that’s been, sorry, plaguing us unmercifully for two years now. And being outdoors allows you to lower your stress levels, as time in nature is restorative and calming. In 2022, make sure to get plenty of outdoor time.

And when you do, Christmas fern will likely be along for the walk.

One of the most common plants in Wild Philadelphia, Christmas fern is also one of the easiest ferns to spot– and know by name. Its fronds are evergreen, so on a Christmas morning walk through a forest, you’ll see its green fronds along the forest floor. Few other plants besides evergreens, rhododendrons, and hollies are still green at this time of year. And if you check out a leaflet– go ahead, look closely– it has a cute little bulge on the bottom, looking, without stretching the imagination too far, something like a Christmas stocking hanging from a fireplace.

Hello, Christmas fern, your introduction to the world of ferns. While there are hundreds of fern species locally, including many that are devilishly hard to key out to species, Christmas fern offers, appropriately, a present of sorts: it is easily knowable as one of the few green things growing along the forest floor right now. I’ve led scores of walks where people want to know the name of this or that fern, and I have to confess that it is likely a member of the giant wood fern clan, a notoriously hard knot to unravel. And lowly ferns just don’t get the love they deserve, as they are lower plants, ones without any flowers whatsoever.

But ferns are important, and are a wonderful story. The first ferns appeared on our planet some 360 million years ago, 100 million years BEFORE the earliest dinosaurs. Ferns are so ancient they predate flowers: Stegosaurus might have munched on ferns, but it never ate a flower. And in Pennsylvania’s geologic history, ferns dominated the dense primeval swamps that were buried underground, the peat slowly cooking to form coal, our state’s iconic fossil fuel.

Our state’s economy is built on the lowly fern.

The Christmas fern’s genus, Polystichum, is very successful, as it is found worldwide, its cousins growing across the entire planet. One reason Christmas fern is so common in local forests is that deer do not seek them out, a great advantage in forests typically overbrowsed by deer. (But fern fiddleheads are all edible, so perhaps consider sauteing some in the spring.)

Ferns create spores, not seeds, and most do so on fertile fronds, specialized fronds carrying structures holding the spores, often on the underside of the frond. In the Christmas fern, sterile fronds typically encircle taller fertile ones, which are also held more erect. Spores tend to be created  between June and October when the conditions are right. The fertile leaflets are at the tops of their fronds– check out frond undersides during summer and fall, looking for brown spots, the sacs that create spores. In the winter, those fertile fronds die away, leaving their sterile evergreen sisters.

While Christmas fern can form colonies, it more typically grows singly or in twos or threes, the foot-long fronds appearing rather tough and leathery. In the winter, it is not unusual to find flattened fronds on the forest floor, squashed from a snowfall, but doggedly remaining green.

So do get your outdoor steps in this New Year as part of your self-care plan, and do introduce yourself to Christmas fern, unwrapping its gifts as you walk.

Climate Watch. New for 2022, this column will end every week with a special update on the unfolding climate crisis, a situation I have long labeled the New Abnormal. Last week, wildfires swept through the Denver suburbs. Fueled by high winds (110 miles per hour) and an extremely dry climate, as of Friday of last week almost 2,000 acres and 500 homes burned while tens of thousands of Coloradans were evacuated– on New Year’s Eve. Those numbers will likely have climbed by the time you read this.

When wildfires flare in the ski-resort capital of the country in the winter, you are unquestionably seeing the impact of climate change.

While spending time in nature helps us to unplug and rejuvenate, finding the time to do so while surrounded by the hustle and bustle of the city can often be a challenge. If you’re looking to get away, there are great spots around Philadelphia to relax and refresh with the family. In addition to checking out these great spots, make sure to join us June 23–24 for the 14th annual Great American Backyard Campout, which is held in collaboration with the National Wildlife Federation. Spend the night under the stars, hike through the forest, and tell stories around the campfire… all while within city limits. Call 215-482-7300 x 137 to register. Check out these amazing spots within a short drive of city limits. 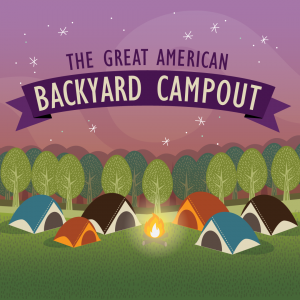 Join us for the 14th Annual Great American Backyard Campout

French Creek State Park (1 hour 10 minutes)
Located in Berks and Chester counties, French Creek State Park is the largest block of continuous forest located between New York City and Washington, D.C. Its options for sleeping arrangements—everything from cabins to cottages to yurts to traditional tents—make it a great spot for both experienced and beginning campers alike.

Ricketts Glen is home to the Glens Natural Area—a National Natural Landmark. The park has 26 miles of trails. The most popular is the Falls Trail (a 7.2 mile loop), where visitors can view 21 waterfalls. There are shorter trail options with waterfall vistas as well.

Cape Henlopen offers a variety of recreational options. Climb to the top of the World War II observation tower, take the Seaside or Pinelands nature trails to explore coastal habitats, enjoy a game of disc golf, or spend the day relaxing on the beach.

Wharton State Forest (45 minutes)
Nestled within the Pine Barrens, the Atsion Recreation Area is at the heart of the forest. Named after the Atsion Mansion, the recreation area is situated on a 100-acre lake perfect for kayaking and canoeing. 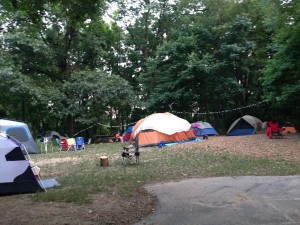 Setting up tents for the night 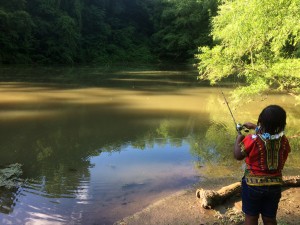