The Unraveling of the Red Knot - Schuylkill Center for Environmental Education 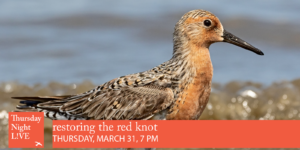 The red knot is one of the region’s most extraordinary birds, facing one of conservation’s biggest threats, but sadly flies under the radar of too many people. Too few of us have heard of the knot and fewer still know its story. But on Thursday, March 31 at 7:00 p.m, we’ll offer you a unique opportunity to dive into this incredible story.

A nine-inch-long sandpiper with a terra cotta belly, the red knot makes one of migration’s longest runs, flying 9,300 miles each spring from Tierra del Fuego at the bottom tip of South America to nest above the Arctic Circle in the spring.

And somewhere around Mother’s Day, the exhausted birds– their gas tanks nearing empty– land on beaches along the Delaware Bay, looking for a critical food source to fuel them on the rest of their journey north. The famished birds need food rich in fats and that’s where the horseshoe crabs come in.

In one of nature’s best-timed events, horseshoe crabs, those prehistoric living fossils that have lumbered across ocean bottoms for 450 million years, haul themselves onto beaches. Large females usually have an entourage of smaller male hangers-on to mate and lay eggs in the surf. Each female lays 80,000 eggs, each a small green BB. They especially emerge in the full and new moons of high tides at night, a spectacle worth seeing in itself, as Delaware Bay is the single largest concentration of mating horseshoe crabs on the planet. (Bet you didn’t know that.)

So just when red knots and other migrating shorebirds need fat-rich food, Delaware Bay beaches are loaded with fatty crab eggs roiling in the surf. So the shorebirds enjoy a raucous debauchery of nonstop feeding, filling up on the eggs that give them the energy they need to finish the trip.

Many other shorebirds join them in this feast, including other sandpiper species like dunlins and sanderlings, plovers, ruddy turnstones, willets, and more, not to mention laughing, herring, and black-backed gulls, plus terns.

It is a sight to behold. Arrive at low tide, and the beaches are crammed with shorebirds, gulls, and terns cheek-to-jowl in a frenzy of feeding, the cacophony of gulls impossibly loud; arrive at nighttime high tide, and the beach is chock-a-block with horseshoe crabs. It is a naturalist’s nirvana. On one visit last year, I easily spotted a huge turkey vulture inexplicably sitting amidst the gulls, quietly munching on dead horseshoe crabs while the gulls noisily fought over eggs. I’ve even seen bald eagles sitting on the beach at low tide at this time of year too, their size standing out among the Lilliputian shorebirds.

But this extraordinary confluence of natural history events is depressingly endangered. While horseshoe crabs have been used for fertilizer since the Lenape days, in recent decades the over-harvesting of the beasts for fertilizer, bait, and even medicine (the crab’s blue copper-based blood is useful to researchers) has greatly depleted their numbers. With fewer crabs emerging in the surf, knot numbers have plummeted, and bird experts are terrified we will lose the race of knots that engages in this long-distance feat. Over the last 20 years or more, there have been fierce battles raging over the allowable number of crabs to sustainably harvest, arguments leaving no one happy, neither biologists nor fishermen. And because three states border on the bay, the knot’s situation becomes even more entangled.

For the last 25 years or more, Dr. Lawrence Niles has been leading national efforts to call attention to the plight of both red knots and horseshoe crabs, and has been featured in many TV and radio news shows over the years. He is our very special guest on Thursday, March 31 at 7:00 p.m., as part of the center’s popular Thursday Night Live series of free virtual lectures. Simply visit our website to register for the event.

Niles has had a front row seat on the red knot story, spending two decades as chief of New Jersey’s Endangered and Nongame Species Program, where he works on other species like piping plovers, and in 2006 started his own company to pursue independent research and habitat restoration in the Delaware Bay and elsewhere. He is also a founding member of the Horseshoe Crab Recovery Coalition and on the board of the National Shorebird Council and Western Hemisphere Shorebird Reserve Network.

“Over the last year,” he said, “we have built the Horseshoe Crab Recovery Coalition to fight the wasteful killing of horseshoe crabs for bait and at the hand of multinational corporations for their blood despite an effective synthetic alternative.” On Thursday night. He will “describe new work on the ecological significance of horseshoe crabs, showing that their importance is far greater than eggs for shorebirds. At their natural levels, he concluded, ”they are a foundational resource for coastal ecosystems.”

It’s a critical conservation story for the region, and I invite you to join me for Thursday Night Live. See you then.

This Week in Climate. After a two-year pandemic hiatus, the world’s youth are returning to the streets for climate strikes from school. Last week, more than 700 protests worldwide were held on Friday, according to Friday’s for Future, the climate strike organization that sprung from Swedish teenager Greta Thunberg’s solitary school strike and vigil at the Swedish parliament in 2018. It’ll be interesting to see where this goes.