The Winters of Our Discontent - Schuylkill Center for Environmental Education 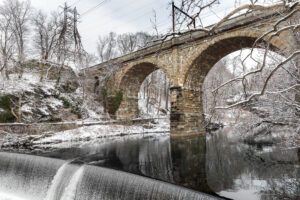 Wissahickon Valley Park under a recent winter’s thin coating of snow. What will this winter bring?

Last winter, Philadelphia received over 22 inches of snow at the airport, just a hair above the long-term 20.5 inch average. But that’s 73 times the amount that dropped during the snowless winter before; if anything, our weather has become erratic and prone to extreme mood swings like this.

So I was intrigued by the Old Farmer’s Almanac prediction that this winter would be a “Season of Shivers.” The new season, they wrote, “will be punctuated by positively bone-chilling, below-average temperatures across most of the United States.” As of early December, they have been right: it has been chilly.

But wait, you might say, what about climate change? Doesn’t a warming climate mean warmer winters with less snow? Well, yes and no.

First, Philadelphia’s winter temperatures have increased 4.8℉ in the 50 years from 1970 through 2020, from an average temperature of 33℉ to almost 38℉. The coldest day of the winter between 1950 and 1980 was always below 5 degrees, usually around 3 or 4 degrees; but for the last 30 years, it has never been below 5 degrees.

The first frost, not too long ago, came around Halloween; in the last 50 years, the first frost has arrived, on average, 17 days– more than two weeks– later, deep into November. “When the frost is on the pumpkin,” goes the very old poem I learned in high school. Not any longer.

But the city’s temperatures for a whole year have increased by 3.5℉, less than the rise in average winter temps. That’s the strange thing about climate change: across most of the United States including all of the Mid-Atlantic and Northeastern states, winters are the fastest warming season. (In fact, in far northern climes– think Alaska, Minnesota, Vermont– the average winter temperature is already fully 5 degrees warmer.

A warmer world means there is more evaporation over the ocean, which means our city’s annual precipitation is climbing too– our city is not just getting warmer, it’s getting wetter. On top of this, extreme precipitation events are on the rise, especially here in Philadelphia, where large-scale downpours have increased by a whopping 360% in recent years, the third largest climb of any American city. While we famously didn’t beat the Giants two Sundays ago (dang it!), we finally beat New York here, who came in number 4 at 350%– not something we want to beat NYC in, frankly.

As any kid learns, what goes up must come down, and more evaporation means more water coming down– and in winter, that just may come down as snow. “It may seem counterintuitive, but more snowfall during winter storms is an expected outcome of climate change,” reminds the Environmental Defense Fund.

Which is why in 2009-10, we had the snowiest winter on record, with almost 79 inches of snow, a winter that included two storms– one in December, another in February– each with more than 20 inches, each storm packing more than a whole winter’s average snowfall.

Another consequence of climate change is that the jet stream– the phenomenon high in the atmosphere that is mentioned in almost every Action News weather report– is changing, with significant consequences.

“A growing body of research,” explains the Climate Reality Project’s website, “indicates that as average global temperatures rise and the Arctic continues to warm, the jet stream is both slowing down and growing increasingly wavy. In the winter months,” they continue, “this is allowing bone-chilling cold Arctic air– typically held in fairly stable places by the once-stronger jet stream– to both spill much farther south than usual and linger over areas unaccustomed to it for longer. So even as winters on average have been getting shorter and warmer, many places should still expect to see bouts of very cold weather from time to time. At least for now…”

So if the Old Farmer’s Almanac is correct, this could be a colder, snowier winter. But this is NOT proof there is no climate change. But here’s something I can say with 100% accuracy: the legions of climate deniers who have an outrageously outsized impact on public policy will scream with every coming snowstorm that that latest snow “proves” that climate change is a “hoax.”

No. They are wrong. It does not. Surprisingly, it fits snugly into our growing understanding of the science of climate change. What goes up must come down, and in winter, it just might come down as snow.

Will it be a White Christmas? Who knows: anything goes in the New Abnormal.