Ukraine: “This is a Fossil Fuel War” - Schuylkill Center for Environmental Education 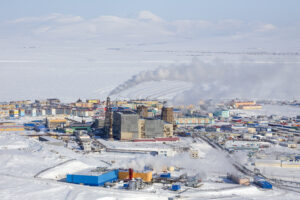 We’ve all been watching the increasingly grim war in Ukraine with a mixture of horror, outrage, and sadness at the needless loss of life and the tragic outpouring of refugees. Given Vladimir Putin’s relentless resolve in pushing forward at all costs, I’m guessing the situation only worsens between my writing this on Friday and your reading it next week.

Svitlana Krakovska has a unique lens to view the war. A Kyiv resident, she’s Ukraine’s leading climate scientist and the head of the country’s delegation that helped draft the latest report from the Intergovernmental Panel on Climate Change (IPCC), a UN-led effort that has been carefully cataloging the climate catastrophe for decades now. The newest massive report, summarizing 34,000 independent studies, was released on February 28, just as Russian bombs began falling. As climate writer Bill McKibben reported last week in The Guardian, Krakovska was finishing the report while sheltering with her four children in her basement, bombs exploding very close to her home.

“Both the invasion and IPCC report,” wrote McKibben, “crystallized for Krakovska the human, economic and geopolitical catastrophe of fossil fuels. About half of the world’s population is now acutely vulnerable to disasters stemming from the burning of fossil fuels, the IPCC report found, while Russia’s military might is underpinned by wealth garnered from the country’s vast oil and gas reserves.”

She told McKibben, “I started to think about the parallels between climate change and this war and it’s clear that the roots of both these threats to humanity are found in fossil fuels. Burning oil, gas and coal,” she continued, “is causing warming and impacts we need to adapt to. And Russia sells these resources and uses the money to buy weapons. Other countries are dependent upon these fossil fuels, they don’t make themselves free of them. This is a fossil fuel war. It’s clear we cannot continue to live this way, it will destroy our civilization.”

With oil and gas literally fueling something like 60% of the Russian economy– there isn’t much else– much of the West has embargoed Russian fossil fuels. That’s great, but few countries in the West are decarbonizing as quickly as we need to for the world to avoid the worst of climate change. And the US is especially intractable, as climate change long ago fell into the deep but growing chasm between Republicans and Democrats, meaning we cannot take meaningful action on this critical issue.

UN secretary general António Guterres bleakly describes the IPCC report as an “atlas of human suffering and a damning indictment of failed climate leadership.” Extreme heat is already killing more people worldwide, some 12 million people are already being displaced by floods and droughts annually,  and healthy available farmland is shrinking. “Without action,”  concludes the report, “worse is coming, and faster than scientists had thought.”

“But it is the conflict in Ukraine,” McKibben continues, “that has caused western governments to hastily attempt to untangle themselves from a reliance on Russian oil and gas. The European Union, which gets about 40% of its gas supply from Russia, is working on a plan to rapidly upscale renewable energy, bolster energy efficiency measures and build liquified natural gas terminals to receive gas from other countries.” That’s all fine, but the US is not holding up our own end of the climate change bargain, even though every day a new brand of electric car puts its glitzy ad on TV. That’s a great start, but we need more. Much more.

With a barrel of oil going now for over $100– it briefly topped $130 last week– oil and gas production will ramp up as companies smell inflated prices and profits– ironically just as we need to leave carbon behind. And this truth is especially painful in Pennsylvania, a state where first oil, then coal, and now fracked natural gas have been king. No less than Tesla founder Elon Musk offered that “we need to increase oil and gas output immediately. Extraordinary times demand extraordinary measures.”

Jamal Raad, executive director of Evergreen Action, has a decidedly different take. “The fossil fuel industry’s so-called solution to this crisis,” he told McKibben, “is nothing more than a recipe to enable fossil-fueled fascists like Putin for years to come. As long as our economy is dependent on fossil fuels,” he concluded, “we will be at the mercy of petro-dictators who wield their influence on global energy prices like a weapon. American-made clean energy is affordable, reliable and free from the volatility of oil and gas markets. The best way to weaken Putin’s grip on the global energy market is to get America off of fossil fuels.”

Amen. Meanwhile, in Kyiv, Krakovska told McKibben she will stay in her home city as the Russian army advances, declining offers at other research institutions. “I know that’s what Putin wants, for us to flee Ukraine so they can have our beautiful country,” she said.

And McKibben concluded his moving essay with this important notion: “Caring about the people of Ukraine means caring about an end to oil and gas.”